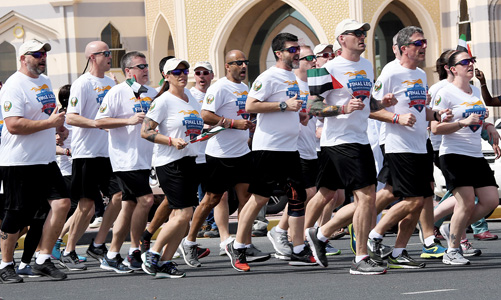 ALL TOGETHER: Senior Constable Mathieu Champagne (third from right) joined forces with many other police officers from across the globe to spread the word of the Special Olympics at 44 different stops in the United Arab Emirates. PHOTO SUBMITTED BY MATHIEU CHAMPAGNE

It was an experience of a lifetime for Senior Constable Mathieu Champagne, as the longtime Taber police officer recently returned from Abu Dhabi.

Champagne was selected as one of two police officers from Alberta, and one of seven from all of Canada who participated in the Special Olympics Law Enforcement Torch Run earlier this month.

“Having 120 police officers from around the world who had never met each other before, you don’t really know what to expect. All I knew about the area was what I saw from the media, and I don’t think the media portrays exactly how the country and the culture is,” said Champagne. “We were met with open arms and we toured the whole country, making 44 different stops. We took in all the historical sites and the architecture, along with meeting some awesome people.”

“The UAE took a big risk in putting in and being chosen to host the World Games for the Special Olympics. I thought they did a phenomenal job. They are a part of the world where it’s not that they are not inclusive, but it’s a big step to being inclusive, including those with intellectual disabilities,” said Champagne. “For them to take this on with 7,500 athletes and hundreds of thousands of spectators from across the country. For them to take this on and showing people how they are being more inclusive, they were just that. The spirit was true, it wasn’t fake. It wasn’t for the cameras, they were taking the time to listen to the stories of the different athletes in our group, how the Games lifts them up.”

Champagne also got to share his story of his involvement in the Special Olympics.

“It’s not just law enforcement officers who can support Special Olympics. Even I have to change my own dialogue and vocabulary. I made a post the other day on social media on Down Syndrome Day and I said embrace differences,” said Champagne. “But maybe we have to change our thinking into embracing what we have that is similar. We have so much that is in common in mankind. There are many things that we share despite our differences. We all have the same ability at compassion. Some of us may have to work harder at doing certain things with challenges we face. But it’s all how we fit in this world and to be welcoming.”

Sport helps break down those challenges which is why Champagne noted he is a big believer in the Special Olympics. While he was there, Champagne also took in some basketball and judo events, along with walking through the athlete village.

“It’s an inclusive atmosphere where we have teams with people with intellectual disabilities playing with people who don’t. For the UAE to take that on and embrace it in a culture that is much different than ours, I think they have taken leaps and bounds from where they once were,” said Champagne. “They are the first country in that area to host these Games. It was a historical moment. The venues were phenomenal there and they were all packed. The nation truly took an interest in this event. All the 44 different ceremonies we had, there were huge crowds welcoming us, they knew what was going on.”

Seeing all that forward progress from a country that had historically been known as being very socially conservative, Champagne added it inspired him to raise the bar here even more in North America when it comes to Special Olympics and the care for those with disabilities. The Special Olympics have been close to Champagne’s heart since having done events off and on since 2006, and really becoming involved in the organization since 2013. Champagne does the Polar Plunge in Lethbridge as a fundraiser for Special Olympics, he also did an Abu Dhabi Dip, filling a bunch of pools with ice on the sand dunes.

“What that means is we can only do better here. In North America, we have been burning down these bridges for a long time and making our communities more inclusive and welcoming. If they can do that there, we can do even better here,” said Champagne. “We definitely don’t have the road blocks that they have there with their traditional ways. We’ve come a long way, but we can only do better.”

Champagne was hesitant at first, wondering how accepting the UAE would be of him, being a relatively tall man with numerous tattoos and be a boisterous guy.

“Going into a culture that is more reserved, there was only one of the communities where the females had to cover up, and even at that, I’m not talking about like only eyes showing like a burqa,” said Champagne, adding he would visit the area again in a heartbeat with all the culture that is involved. “They had to cover their arms and their legs. So as a team, we all wore pants and long sleeves that day as a sign of support. There were questions about my tattoos and what they were about, they wanted to see them because they weren’t common in their culture. It wasn’t what I expected with my preconceived notions.”

As Champagne has returned home, he continues to campaign for the Special Olympics, encouraging locals to get involved. This past weekend, the Special Olympics Law Enforcement Torch Run was at the Home and Garden Show in Lethbridge, kicking off its Flame of Hope Harley Raffle which the group continues to sell tickets for, for a chance to win three Harley Davidson motorcycles.

In the first weekend of June, the LETR will be doing its provincial bike ride from Lethbridge to Edmonton, the sixth consecutive year Champagne will be participating in the event.

“There are always Special Olympics events going on, check out the Special Olympics web site,” said Champagne. “Anyone who wants to join up for the bike ride to Edmonton, it’s open to the public.”

If you would like more information on how you can get involved in the Special Olympics, you can e-mail Mathieu at mchampagne@taberpolice.ca.