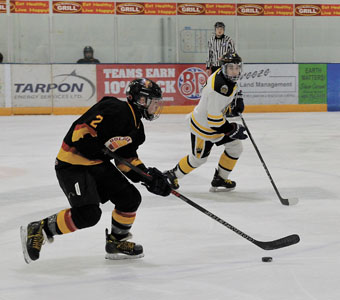 Landon Porteous was solid in net, stopping 40 of 41 shots on goal to earn the win.

The Suns followed up with a 5-1 loss to Red Deer Steel Kings (11-19-1) at the Taber Arena on Saturday evening.

PEEWEE: Taber peewee “AA” Golden Suns (20-8-2) ended up on both ends of the ledger in SCAHL play on the weekend.

The win column came in a 6-3 doubling of Red Deer Parkland (18-6-7) at the Taber Arena on Saturday afternoon.

Magarell and Law scored for the Suns.

Wright took the loss in net, facing 44 shots on goal.

D.J. Tonin and Brogan Booth scored for the Golden Suns.

Taber midget “AA” Golden Suns host Foothills Bisons at the Taber Arena at 8:30 p.m. on Friday night. The team then travels to Wheatland Chiefs on Saturday evening. The busy slate continues on Sunday where the Suns host Lethbridge Hurricane Hounds at 3:30 p.m. at the Taber Arena.