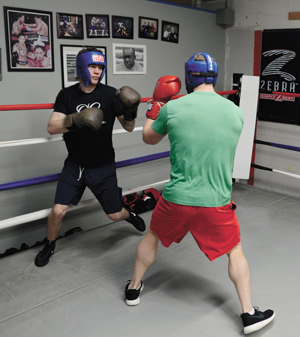 Brent Anderson will be using his defeat at Golden Gloves earlier this month in Calgary as motivation to keep the fires burning for when he enters the ring again at provincials next month.

Anderson has built up quite the rivalry with Emile Smith, where this latest Golden Gloves has marked the third time the fighters have squared off against each other, with Anderson winning the two previous match ups.

Unfortunately, this time around, Anderson suffered a split decision loss to Smith, fighting at 165 pounds.

“We went to war and I felt like I was in the driver’s seat for the first two rounds and I thought I was controlling the fight, making sure he wasn’t landing too many big blows. If I was getting hit, it wasn’t more than one (at a time),” said Anderson. “The third round, I sat back which I really think I shouldn’t have done, and at the end of the day, we didn’t get the decision. I thought I had the first two rounds in the bag, so I didn’t really want to get into too much of a dog fight in the third. I sat back in the third which ended up being a poor decision on my part.”

Trainer Joel Mills added with the current scoring system, you have to win two out of the three rounds by the majority of the judges.

“I thought we had the first two in the bag as well, even if he took the third round, it should have still have given us the win. But you never know, judges see different things,” said Mills. “You are always going to feel like you got robbed when it’s your guy. Maybe they saw some things we weren’t seeing because we were in the moment. It was a close fight.”

Anderson’s strategy in the fight was to utilize his jab and stay long. While Anderson played a more defensive role in the third round, he wished the round could have gone a little longer where the sense was the tide was turning.

“The last 10 seconds of the third round, I had him pretty hurt,” said Anderson, as the tilt was voted fight of the weekend at Golden Gloves. “I wish it would have gone a few more seconds, but it is what it is.”

Earlier, Anderson battled Luke Forrester and downed him with a body shot that stopped the fight in the third round, earning him a spot to the championship of Golden Gloves.

“He was built the same as me, being tall and lanky. He was slick and hard to hit,” said Anderson. “I was cutting the ring off, making sure he was staying with his back to the ropes for a good portion of the fight. I was dictating the pace. I was noticing he was moving back a lot so I needed to mix it up with more than one punch at a time. I was throwing combinations instead of pot shoting. The punches were piling up on him.”

Trainer Joel Mills added Anderson’s fight against Forrester was probably the best one he has had in his young amateur boxing career.

“From top to bottom, offence, defence, controlling the ring. He stayed in control the whole time,” said Mills. “Usually, there are points in most fights where you find yourself in a situation that is not good and you have to scramble. But, he didn’t have to do that one time. He was in control of that fight from the opening bell.”

The final decision has certainly kept Anderson hungry in his learning experience where he will not make the same mistake the next time he enters the ring.

“I’ll make sure to not leave it up to the judges, make it so obvious that it can’t be taken from you (in a split decision). Make sure I stay aggressive,” said Anderson.

Anderson will next be competing at provincials in Leduc on March 9-10.