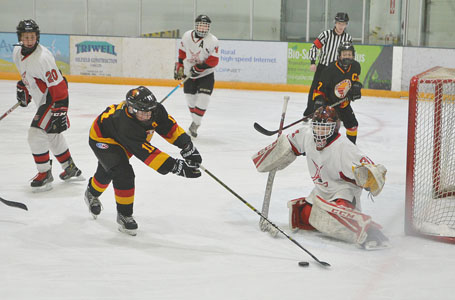 Kahil Wright earned the win in net for the Golden Suns, facing 27 shots on goal.

Magarrell and Duell each had two goals apiece and Bowman Klippenstein and Aidyn Law had singles. Duell registered three assists.

Brylin Noble faced 25 shots on net for the win in goal.

The first was a big 5-2 victory over the favoured Lethbridge Hurricanes (20-5-5) at the Taber Arena on Saturday evening.

Landon Porteous faced 45 shots on goal for the win.

The team then suffered a 6-2 loss to Medicine Hat Hounds (17-11-3) at the Taber Arena on Sunday afternoon.

Millo and Brinley Degenstein scored for the Suns.

Scout Sidam was peppered with 46 shots on net in the loss.

Brogan Booth and Kolby James each had two assists apiece. Ethan Barrows had a busy night in net to preserve the tie, stopping 44 of 48 shots on net.

Gage Reimer was solid in net, stopping 34 of 35 shots to earn the win.