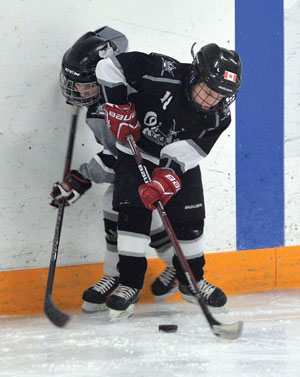 Taber midget Oil Kings battled tough in its second round of provincial playdowns, with a tight 3-2 loss to Picture Butte on the road on Saturday.

Cole McLelland and Dawson Hendricks scored for the Oil Kings.

ATOM: Taber atom Oil Kings were victorious in both its Central Alberta Hockey League games on the weekend.
Saturday’s tilt was a 7-3 victory over Magrath Chiefs at the Taber Arena.

Sunday’s game was a 6-4 win over Duchess Storm at the Taber Arena.

NOVICE: On Feb. 2, a short-handed Taber novice Oil Kings team due to illness, still managed a 7-3 win against Carstairs Bruins at home.

Lincoln Wiebe got a hat trick. Delphin Deboer and Jenner Workman each had a three-point game, with each having a goal and two assists. Dane DeGraw scored two goals, while Ethan Volk had an assist.

The team hit the road this past weekend, earning two more CAHL wins and ending its regular season undefeated (14-0-1).

Saturday’s tilt was an 8-2 win over Cremona Cowboys.

DeGraw had a five-point game, with one goal and four assists. Wiebe had two goals and one assist. Julian Wordman and Deboer each had two goals, while Nathan Gensorek had a single. Kellon Schalk and Mikaelah Clingman each had a single assist.

The Oil Kings’ winning ways continued on Sunday with a 9-2 victory over Carstairs Bruins.

DeGraw tallied four goals, Wiebe had two goals and an assist, and Volk had one goal and two assists. Madix Miller and Jenner Workman each had a single goal and assist. Schalk had a single assist. Ashton Jensen earned the wins in net for the Oil Kings.

After winning first place in its tier, the novice team is now onto playoffs.