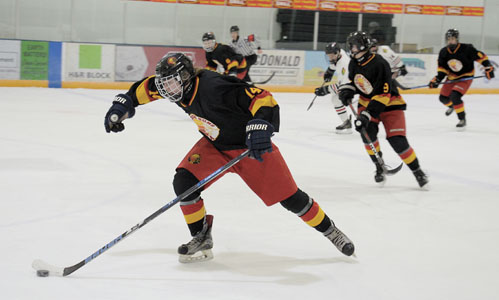 Taber bantam “AA” Golden Suns (9-14-4) were victorious in both of its road South Central Alberta Hockey League games on the weekend.

The first was a 3-1 win over Red Deer Ramada (8-13-5) on Saturday afternoon, scoring three unanswered goals in the third period.

Brinley Degenstein tallied twice to go with an assist and Nathan Verloop notched a single to go with two assists.

The team proceeded to earn an identical 3-1 victory over Red Deer Steel Kings (9-17-1) on Sunday.

Taber bantam “AA” Golden Suns host Red Deer Ramada at 8 p.m. on Saturday at the Taber Arena. The team then travels on Sunday to take on the Wheatland Warriors.

Jayden Kostiuk had the hat trick and James, Fujita, Sande, Hall, Tonin and Booth had singles.

Barrows earned the win in goal, facing 35 shots on net.

Taber midget “AA” Golden Suns do not return to SCAHL play until Feb. 8, when they host CBHA Blackhawks at the Taber Arena at 8:30 p.m. The team then hits the road on Feb. 10 against CBHA Rangers.