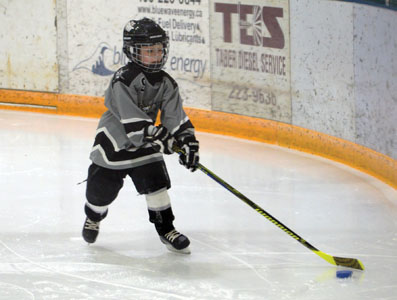 ICE PLAY: Luca Nielsen of the initiation Oil Kings 1 takes the puck behind the net during this past weekend’s initiation tournament held at the Taber Arena. TIMES PHOTO BY COLE PARKINSON

MIDGET: Taber midget Oil Kings won both of its hockey matches on the weekend, starting off with a 4-2 doubling of Vulcan Hawks at the Taber Arena on Friday.

Cole McLelland and Byron Kress each had two goals. Peyton Poncelet had two assists and McLelland, Brylan Span. Shea Hathaway, Spencer Phillips and Michael Stronge each had a single helper. Blake Van Beers was solid in net for the win.
The team traveled to Picture Butte on Sunday and won 6-2.