Rebels move into New Year with pair of wins 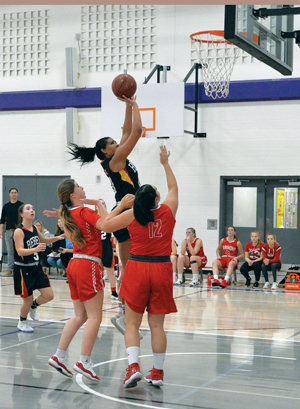 “With WCHS not having a varsity team last year, their varsity team this year is quite inexperienced,” said coach Kenney Wood.
“We were able to build a lead very quickly and scored on almost every possession. They didn’t match up very well to our height and we were able to get many rebounds both offensively and defensively.”

“Everyone played lots of minutes and everyone scored,” continued Wood. “We were able to outlet the ball well which enabled us to get some fastbreak opportunities, we were also able to get the ball moving offensively around the perimeter which also lead to some great interior passing for some easy hoops.”

Myers’ senior varsity squad would encounter stiffer opposition the following evening on Dec. 20 in a battle with Lethbridge Collegiate Institute (LCI). The Rebels would lead the game 47-38 at half time, but LCI would fight back hard to hold Myers to a bare six-point 94-88 win.

“What a great way to wrap up 2018,” said Wood. “The team really played well and defended extremely well and we didn’t allow LCI’s two main scorers to win the game for them. It’s a good win for the team. LCI is a tough team. They play a very up tempo game and put lots of pressure on the ball. We moved the ball pretty well down the floor and were able to get a few easy points. When we move the ball by passing and not dribbling we are very hard to stop.”

Sparks would prove to be a one-woman wrecking crew for the Rebels in the win, hoovering up 33 points with 12 rebounds. Robbins was not far behind with 19 points, followed by Haller with 16 and Anika Steed with 12 points.

“Marty (Johnson), Brandon (Bullock) and I are happy with the team thus far but know they need to continue to be smart players and not just basketball players,” said Wood. “We are looking forward to 2019 and trying to get back to the zone final and on to provincials in March.”

The Rebels hit the road for a league game as they head to Medicine Hat on Jan. 9 for a game to kick of the 2019 portion of the schedule.