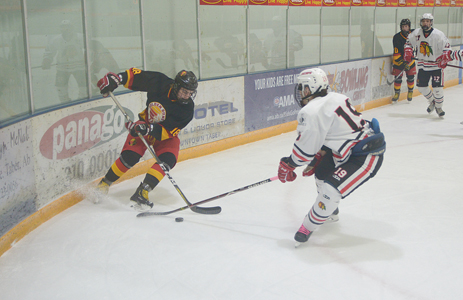 The first was a 2-0 blanking of Bow Valley Timberwolves (10-3-0) on Saturday afternoon.

Kade Duell and Aidyn Law tallied for the Suns. Brylin Noble and Kahil Wright combined goaltending efforts in the shutout, facing a combined 25 shots on goal.

The team proceeded to beat Airdrie Lightning Red (5-7-2) 5-3 on Sunday afternoon, thanks to three unanswered goals.

Scoring was spread out, with Law, Duell, Kayne Van Metre, Hayden Onda and Nathan Planger all getting singles.

Wright earned the win in net, facing 26 shots on goal.

Taber peewee “AA” Golden Suns have a busy weekend of SCAHL play, hitting the road on Friday and Saturday with games against Wheatland Braves and Red Deer Motors respectively.

The team returns home on Sunday to host Okotoks Oilers Green at 1 p.m. at the Taber Arena.

Gage Reimer faced 23 shots on net in the loss in goal.