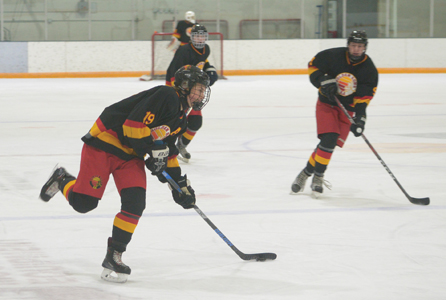 LEG KICK: Ryden Rempel of the midget “AA” Taber Golden Suns rips a shot on net in a game against CRAA Blue earlier this month at the Taber Arena. TIMES PHOTO BY COLE PARKINSON

Taber peewee “AA” Golden Suns are on the road this weekend with games against Bow Valley Timberwolves and Airdrie Lightning on Saturday and Sunday respectively.

The Golden Suns blanked Airdrie Lightning (4-9-1) 1-0 on the road on Saturday afternoon.

Landon Porteous stood on his head in the shutout, stopping all 38 shots he faced.

The team proceeded to skate to a 3-3 draw with West Central Tigers (8-2-3) on the road on Sunday afternoon.

Despite being badly outshot, Scout Sidam earned his team a single point in the standings by stopping 42 of the 45 shots on net he faced.

Taber bantam “AA” Golden Suns do not return to regular SCAHL play until Dec. 8 with a road game against Bow Valley Timberwolves. The team is also on the road on Dec. 9 against Central Alberta Selects.

Gage Reimer was solid in net, earning the win by stopping 32 of the 34 shots he faced.

Taber midget “AA” Golden Suns are on the road on Friday against NWCAA Stamps before returning home on Saturday with a 5:30 p.m. game against Wheatland Chiefs at the Taber Arena.