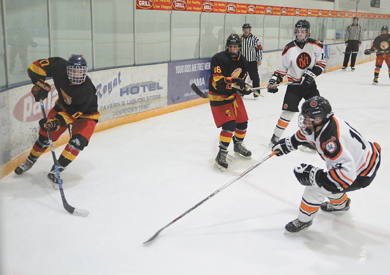 BANTAM: Taber bantam “AA” Golden Suns (3-10-1) had a tough weekend of SCAHL play, dropping all three of its games.

Bantam Golden Suns returned home on Saturday afternoon and were doubled up 4-2 by Airdrie Lightning (4-7-1) at the Taber Arena.

Rhett Klemen and Nathan Verloop tallied for the Suns.

Scout Sidam faced 25 shots on net in the loss.

Sunday afternoon’s game was a 8-0 blanking at the hands of West Central Tigers (8-1-2) at home.

Taber bantam “AA” Golden Suns are on the road this weekend with games against Airdrie Lightning and West Central Tigers on Saturday and Sunday respectively.

D.J. Tonin helped the Suns earn the tie by scoring both of Taber’s goals.

Ethan Barrows faced 23 shots on net to earn the win in goal.