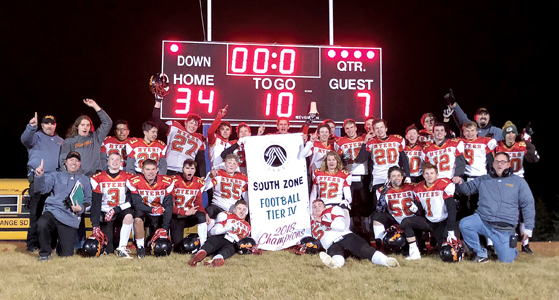 W.R. Myers Rebels football team was more than zoned in, in its ASAA South Zone Tier IV championship against the Willow Creek Cobras on Friday night.

Another dominating performance earned the Rebels the south zone banner in a 34-7 victory.

“It’s a pretty amazing feeling to win that zone banner for the first time in a decade. We’ve come so close the past two years, and to finally get the job done feels pretty special. Our boys seemed extra driven to win this one,” said Jason Jensen, head coach of the W.R. Myers Rebels football team.

That drive was self evident, right from the opening kick-off, when Rebels returner Denzel Gross caught the ball with a full head of steam and busted off a 65-yard return for the touchdown on special teams. A staunch defensive effort in the Cobras’ first offensive series gave the Rebels the ball back on the opposition’s 20-yard line. One offensive play in and Rebels quarterback Mike Sawatzky scrambled the needed 20 yards for the major and the Cobras were left fangless 14-0 before they even knew what hit them.

The Cobras tried to take flight in its next possession, but found the Rebels skies to be unfriendly, as cornerback Johnny Tams recorded his sixth interception of the year. It set up a five-play drive that saw Sawatzky take a one-yard plunge into the endzone, taking a 20-0 lead before the first quarter was even done.

Any hope of a Cobras comeback were dashed in the dying seconds before half-time. Offensively the Cobras started to find their momentum, and were able to put together a couple of solid series behind a punishing overload rushing scheme, and the athletic ability of All-Alberta runningback Ethan Perry.

The Cobras rushing game, combined with some ill-timed penalties taken on by the Rebels, found W.R. Myers defending from its own one-yard line. The Rebels stood tall, and kept them out on two consecutive rushing attempts, and the clock ran out, signaling the end of the half.

The second half saw Willow Creek come out and put together an extended drive that ate up most of the third quarter. The Cobras were able to complete on a long catch and run, followed by an Ethan Perry touchdown run to close the gap to 20-7.
The Rebels responded by taking the ball and marched downfield.

Rebels ripped off a sequence of short runs by five different players, before Gross broke away on a 21-yard toss play. Sawatzky once again plunged into the endzone from the one yard line, for his third touchdown of the day, bringing the score to 27-7 at the start of the fourth quarter.

One last drive by the Rebels offence saw runningback Oskar Timofiejew crash through the Cobras defence for a touchdown.

“I know I keep saying this, but I couldn’t be more proud of these boys, and the way they play as a well-oiled machine. It was pretty fantastic to watch those boys finally raise the zone banner, and they’ve certainly earned everything they’ve gotten so far,” said Jensen. “From here on out though, as we head into provincials, we have to be forward-focused, as each game could be our last.”

The Rebels host Drumheller Titans in the first round of provincials at Ken McDonald Memorial Sports Park on Saturday afternoon.

“We just played them a couple of weeks ago, and that was probably the toughest game we’ve played this year, at least from a physicality standpoint, so we’ve got to be prepared for another war,” said Jensen. “I can’t help but feel confident these Rebels are up to the task, and this time we get to do it at home, in front of our great fan base. I can’t wait.”

The Rebels play the Drumheller Titans on Saturday at 1 p.m. at Ken McDonald Memorial Sports Park.