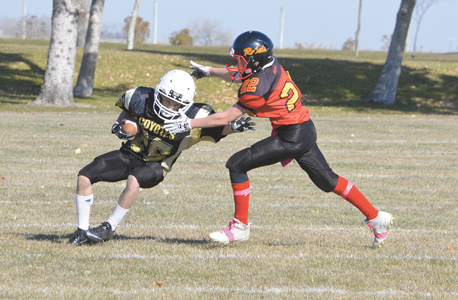 Taber bantam Rebels football team is off to the second round of playoffs.

A first-round victory over the Lethbridge Coyotes means the Rebels will face the Magrath Wolverines, Saturday in Taber, as the Southern Alberta Minor Football Association playoffs continue.

Taber scored a decisive 40-14 win over the Coyotes, despite a sloppy first half that saw the Rebels take a 13-7 lead into the half.

“That was about the worst half of football we’ve played all year offensively,” said Rebels offensive co-ordinator Garrett Simmons. “We had multiple opportunities to put the game away early, with the ball deep in Coyotes territory, and it was turnover after turnover.”

“We could not get out of our own way,” said Simmons. “Whether it was missed assignments, bad timing or just bad luck, we really looked out of sorts early on.”

The second half was a different story, as the Rebels defence put the clamps of the Coyotes, as Taber’s offence came to life.

“We put the ball in the air more effectively and got our ground game churning out some effective yards,” said Simmons. “Defensively, we were constantly in the Lethbridge backfield and gave them no time to operate.”

Aiden O’Connor had a big day on offence for the Rebels, as the slotback scored three majors, with a 50-yard run and touchdown catches of seven and 17 yards. Mason Werewka had a 20-yard touchdown catch, while Kyler James hauled in a five-yard pass from quarterback Kade Lund, who finished 9-for-13 for 83 yards and four touchdowns and one interception.

“The wind kind of wrecked our passing game in the first half,” said Simmons. “A couple of balls were blown off target and we dropped a few passes early on. We cleaned that up in the second half and were much more effective through the air.”

James added five tackles, while Werewka had four stops and one quarterback sack. Abela and O’Connor chipped in with four tackles each.

“Our defence has been a strong point all year,” said Simmons. “After we allowed that first-half touchdown to tie the game, we are air tight on defence the rest of the way.”

Saturday’s second-round playoff game against Magrath will be another test for the Rebels, after the Wolverines scored an exciting 14-13 come-from-behind win last weekend over the Lethbridge Bulldogs.

“That Magrath team is going to be coming in on a phenomenal high after that playoff win last weekend,” said Simmons. “We are going to have to come ready to play, and have a much better first half.”

The winner of Saturday’s Taber-Magrath contest advances to the league final, against the winner of the Lethbridge Cougars-Claresholm game.