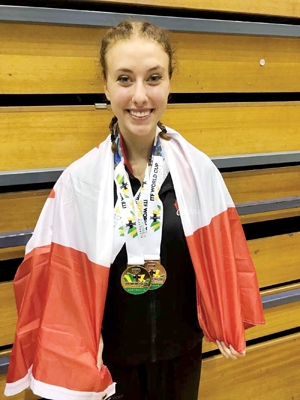 PATRIOT: Grace Holowiski shows off her Canadian pride, donning the Canadian flag, and the medals she earned at the Taekwon-do World Cup in Australia. TIMES PHOTO SUBMITTED

Grace Holowiski was Down Under at the Taekwon-Do World Cup and came away with some medals in late September.

The Taberite lost her first round of patterns, but redeemed herself by winning bronze in specialty breaking and gold in sparring at the World Cup in Australia.

“In specialty breaking, there are two breaks that are performed that are based on height and jumping. We ended up going into a break-off for over an hour. In a break-off, the heights increase five to 10 centimetres on each break until someone doesn’t hit there target. This division is one of the hardest. Grace’s hard work in the gym doing plyometrics definitely paid off,” said coach Brandi Merritt-Miyanaga of Merritt’s Ultimate Taekwon-Do.

For sparring, Holowiski’s first round was against Argentina.

“To compete at this level requires a lot of time and dedication. It means going to the gym and working out two to three hours a day, five days a week. We went into this tournament with goals and expectations and she met them.”

Holowiski is continuing on with her training, where she will compete at nationals in November in Calgary. It will serve as a qualifier for the World Championships in Germany in April 2019.