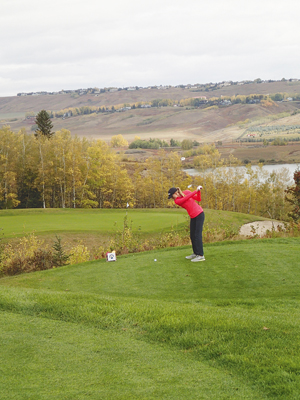 While Taberite Alanna Makarchuk is now moving into the indoor training portion of her golf season, the outdoor season was not too shabby with impressive finishes at high school zones and provincials.

Makarchuk took the zone title in Lethbridge with a solid round at Paradise Canyon.

“The course isn’t laid out to suit how a lefty misses with how the water is laid out with most holes. But I play Paradise quite a bit so know the course quite well,” said Makarchuk, who shot an 80 to win the zone championship. “My driver helped me out quite a bit. I was hitting it really well that day. It shortened the course up for me.”

Moving onto provincials in Calgary, the Taberite played rounds at River Spirit Golf Club and Springbank Links Golf Course, shooting rounds of 79 and 83 finishing seventh out of a field of 70 golfers.

“The first day I played pretty well. It was a super-tough front nine. Yardage wise, the course was super short, but the first nine there were so many bad places to go and miss. It was super hilly,” said Makarchuk. “On some spots there was a hill right in front of the green and so if you were short, you had to work your way back up to the green.”

Makarchuk’s long game once again served her well at provincials, allowing her to crack the top ten.

“My long game served me really well. My short game was not as good as I wanted it to be,” said Makarchuk. “Mainly with my putting, I had some issues in my second round.”

Makarchuk was able to calm some of her provincial jitters by having some familiarity at her time in Calgary.

“I was pretty calm. It ended up being a group of girls that I normally play in tournaments with. It made for the same of pretty much any other tournament,” said Makarchuk.

FEATHERED FRIEND: Alanna’s highlight of her season came at Alberta provincials where she shot her lowest competitive round ever. In her last round of high school provincials in Calgary, Makarchuk scored an eagle, sinking her shot form 100 yards out over water on a Par 4.