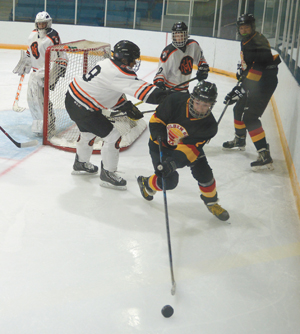 SUN SCREEN: Riley Preachuk looks to pass the puck in front of the net on Sunday. TIMES PHOTO BY TREVOR BUSCH

Taber bantam “AA” Golden Suns’ (0-3) SCAHL homestand had the squad still searching for its first win, as the team dropped both its games on the weekend.

The first was a 7-0 blanking at the hands of Bow Valley Timberwolves (4-0) at the Taber Arena on Saturday evening. Scout Sidam faced 47 shots on goal in the loss.

The team continued play on Sunday afternoon and dropped a 4-1 decision to Medicine Hat Hounds (2-1-1) at the Taber Arena.

Taber bantam “AA” Golden Suns hit the road on Friday night with a game against Lethbridge Hurricanes before returning home on Saturday with a tilt against the same Hurricanes in a home-and-home series, 5:30 p.m. at the Taber Arena.

A huge three-goal second period powered Lethbridge Hurricanes White (2-1) to a 3-2 victory over the Suns on Friday night as Taber hit the road.

Connor Chapman and Rhett Serfas tallied for the Suns.

The Golden Suns returned home on Saturday afternoon, and this time it was a big three-goal third period that did them in, in a 6-4 loss to Wheatland Braves (3-1).

Taber peewee “AA” Golden Suns are on the road in its next weekend of SCAHL play, battling Okotoks Oilers Green on Oct. 13 and Foothills Bisons on Oct. 14.

MIDGET: Taber midget “AA” Golden Suns came out on the short end of the stick in a 3-1 loss in its South Central Alberta Hockey League to the Medicine Hat Hounds in its home opener on Friday night at the Taber Arena.

Taber Golden Suns host CNHA Blazers on Friday night at 8:30 p.m. at the Taber Arena. The team then travels to Lethbridge on Saturday for a tilt against Hurricane Hounds.