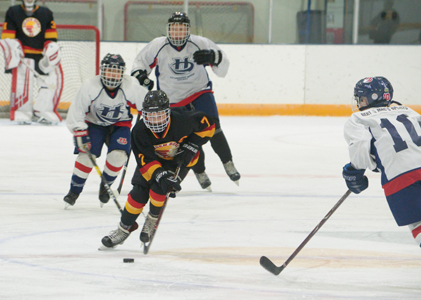 Taber peewee “AA” Golden Suns started off its 2018/2109 South Central Alberta Hockey League season on the right note with a 4-2 doubling of Lethbridge Hurricanes White in the teams home opener at the Taber Arena.

Scoring was spread out with Brady Magarrell, Hayden Onda, Oscar Oliveros and Colby Gulliver all notching singles for the Suns. Aidyn Law drew two assists. Kahil Wright faced 25 shots on goals to earn the win in goal for the Golden Suns.

Taber peewee “AA” Golden Suns square off against Hurricanes White on the road on Friday in Lethbridge at 6:45 p.m. at Adams Ice Centre. The team returns home on Saturday to host Wheatland Braves at 3 p.m. at the Taber Arena.

BANTAM: Taber bantam “AA” Golden Suns were blanked 6-0 by the Lethbridge Hurricanes on the road on Saturday night in SCAHL play.