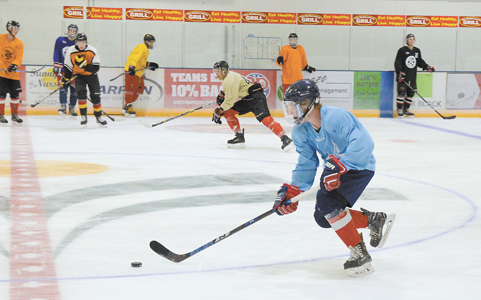 AUGUST ICE: Participants of the VerSet Skills Camp went through many vigorous conditioning drills at the Taber Arena. The camp concluded earlier this month. TIMES PHOTO BY GREG PRICE

Brandon Davidson knows there’s always room for improvement. With that mindset and a new training regiment and location, the almost 27-year-old defenceman from Taber is confident that will land him a new team when the 2018-19 National Hockey League season begins.

“It’s been a different summer for me,” said Davidson Thursday afternoon at his hometown Taber Arena, where he is a special guest instructor at the annual Ver-Set Skills Camp run by Lethbridge’s Kris Versteeg, Taber‘s Devin Setoguchi and Rich Wiest. “Usually, I stay in the Lethbridge area, but I’ve been living in Edmonton this summer. I switched trainers and hired a skills coach and a skating coach and it’s been good. We’re all working to get better every year and like I tell the kids on the ice, ‘I’m 26 years old and I’m still trying to get better.’ It’s a never-ending game and it’s been great. I’m also looking to get a job as well and things are starting to happen and it’s exciting. I’m just making sure I’m ready personally for the next step and making sure I can put my best foot forward.”

The duo were back on their southern Alberta home stomping grounds earlier this month.

“I just came home for the week,” said Davidson. “All my family still lives in Taber, some have moved to Lethbridge, but this is my home.”

And he spent the last week giving back to his fellow locals.

“Not many people get to experience what I have and that’s just a blessing,” said Davidson.

Davidson started the season with the Montreal Canadiens before getting traded to the Edmonton Oilers, the team that drafted the six foot-two, 208-pound blue-liner in the sixth round and 162nd overall in the 2010 NHL Entry Draft.

But at the trade deadline, Davidson found himself headed back east as the Oilers sent him to the New York Islanders, who didn’t extend Davidson a qualifying offer at the end of the season.

That has the Taber product kicking the proverbial tires.

“There has been some interest, for sure, from three or four teams at this point,” said Davidson. “We’re moving into August and you kind of want to have some security and know where you’re going. I’m at the point right now with a few teams that we’re going to start making some commitments and hopefully start a new chapter in my life. I’m really excited and ready for a new opportunity and ready to make this my own.”

Versteeg spent the week overseeing the camp that bears part of his last name.

Like Davidson, the Lethbridge product with a pair of Stanley Cup rings during his time with the Chicago Blackhawks was also looking for a new team after not getting a qualifying offer from his former team, the Calgary Flames.

Versteeg put up eight points in 22 games with the Flames before undergoing hip surgery in December.

He returned in mid-March, but only played in two more games.

“I feel great right now,” said Versteeg. “I can skate and train on the same day and I’m able to do a lot of things that I wasn’t. I feel really good and I feel really confident going into the season that no matter where I play that I’m going to be at the level I want to be at.”