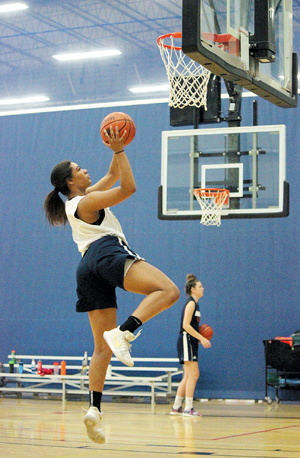 TEAM SUPREME: Kitawna Sparks has been practising hard with Team Alberta in both Lethbridge and Edmonton in preparation for nationals which start next week. TIMES PHOTO SUBMITTED BY DIANE SPARKS

Team Alberta will be trying to go for basketball gold later this month, with a local Taber product helping that cause in the middle.

Kitawna Sparks made the cut for the Team Alberta 17U Girls Team among roughly 50 players that tried out.

“We had an open tryout in January and then that was cut down and there were three rounds of tryouts with a final selection camp,” said Dave Waknuk, head coach of the 17U Team Alberta girls squad and assistant coach with the University of Lethbridge Pronghorns women’s basketball team. “We deemed Kitawna one of the 12 best players in the province. Kitawna is someone I’ve known through various programs.”

Having past provincial experience with the 15U team, Team Alberta will be making its way to the national championships which are in Fredericton, New Brunswick and run Aug. 5-12.

“Kitawna is someone who with her skill and talent definitely belongs in the top 12 in the province. She is someone at her position, there are not a lot of players like her, that can play at her size and skill and do the things that she does,” said Waknuk. “Kitawna is a unique athlete. She is someone who does things that every basketball coach would want. She is a good rebounder, a tough defender and she finds a way to put the ball in the basket. She is a great screener. She’s a really good teammate and a good person who can bring plenty of positive things to the table.”

As a multi-talented forward, Waknuk noted Sparks will bring high energy to both ends of the floor, along with scoring, rebounding and defending down low. Every single province and territory will be represented at nationals, with Team Alberta initially going in as the No. 4 seed. The team has been practising together in Edmonton and Lethbridge for the month of July.

There will also be 15U girls nationals being played in Fredericton as well.

“You will be seeing the best players from across the country, so it’s a pretty neat event,” said Waknuk. “You will see the absolute best talent, it’s a great event and the level of talent is unprecedented.”