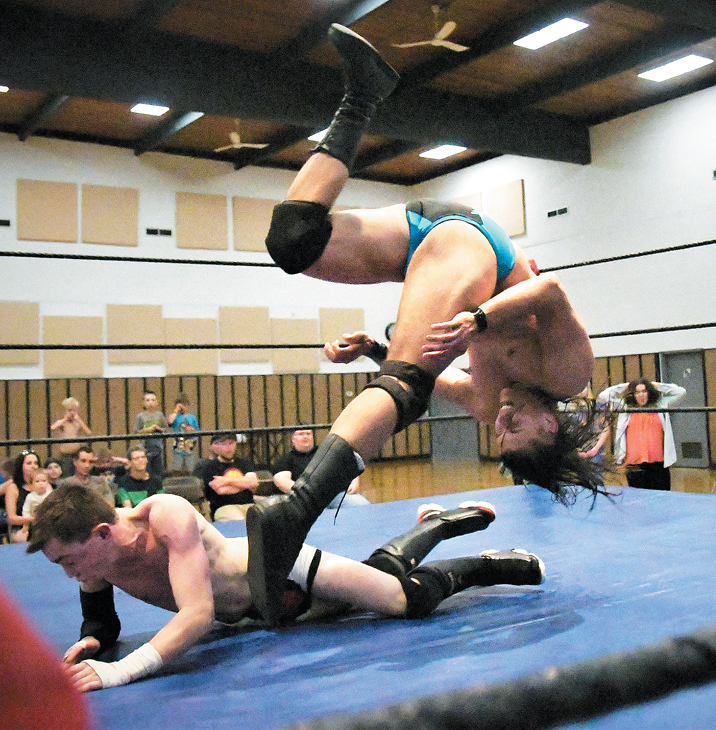 When it was announced Friday night that “The Tattooed Terminator” Massive Damage had suffered an injury prior to the Pure Power Wrestling show at the Taber Community Centre, current PPW Heavyweight Champion “Cougar Meat” Kyle Sebastian thought he was going to have the night off. With his evening free, he decided to head to the ring anyway to treat Taber rasslin’ fans to a champion-level strip tease.

He didn’t count on being interrupted by Jumpin Josh partway through — no doubt to the relief of many of the fans — who promptly challenged him to a title shot in the Main Event of the evening.

“I don’t think you know what you’re getting yourself into,” Sebastian told his former protégé. “Look at this belt. Across the top, it says ‘Heavyweight.’”

But Josh didn’t seem to be in a mood to take no for an answer. Instead, he pointed to the other title match planned for the evening between PPW Cruiserweight Champion Travis “The Heat” Copeland and “The Big Sexy Beast” Bradley Graham.

Graham, who is billed at “one hundred and sexty-nine kilograms,” has managed to be part of the cruiserweight division for much of 2018 after petitioning PPW management and claiming he was being body shamed by the organization. For some reason — possibly to avoid a public relations headache — PPW has allowed the big man to compete in a division designed for wrestlers half his size.

“If the Big Sexy Beast can compete as a cruiserweight, anything is possible,” Josh said.

The match was set, and in the Main Event, Josh took a tremendous beating from Sebastian. But, just as he always does, Josh managed to hang on long enough to find an opening and take his shot.

And it worked. Some quick acrobatics left Sebastian dazed, and as Josh covered the champ for the pin, the crowd howled and counted alongside the referee.

At ‘two,’ Watts appeared out of nowhere, dropping heavy hands on Josh and ending the match. Technically Josh won by disqualification, but instead of gold and glory, he received fists, feet, and frustration.

Fortunately for Josh, “The Real Deal” Sydney Steele was backstage, still seething from the double count-out finish between himself and Watts earlier in the evening. Steele brought a chair, cleared the ring, and convinced “Bulldog” MacBain to restart the fight as a tag-team match.

This time, Josh made no mistake. He hit a finisher and pinned Sebastian for the three-count in the middle of the ring.

He left the ring with a measure of satisfaction knowing he has what it takes to compete against PPW’s elite.

But the gold stayed in the ring with Sebastian — for now.

The other title match of the evening saw Copeland try to body slam the Beast when his back gave out. He learned his eyes were bigger than his stomach and the mistake nearly cost him his title.

A long-running feud between “The Cheetahbear” Jude Dawkins and “The Headline” Shaun Martens played out its newest chapter in Taber with Dawkins decree: “This is Cheetahbear country!”

Unfortunately, inside the ring, it was also Headline country, as Martens landed the same devastating piledriver he nearly ended Dawkins career with a few months ago.

The evening began with Taber’s most hated son, Cyanide, making an open challenge to anyone in the locker room while his manager, “The Black Heart” Vinnie Valentine, was egging the rest of the roster on.

“There’s not a man in this building who can beat Cyanide,” he told the Taber faithful.

The challenge drew Angelica to the ring, though Cyanide didn’t realize she had come out to accept the challenge.

“Why don’t you go get me a sandwich, Toots?” Cyanide asked, giving her a lower body slap for good measure.

Angelica returned the favour with a four-alarm slap to his face, and from there the fight was on. At one point, Cyanide decided he’d had enough and attempted to hit Angelica with a low blow.

Lacking the specific equipment he was aiming for, Angelica was able to return the favour and score a win.
Pure Power Wrestling will be back in Taber in October.