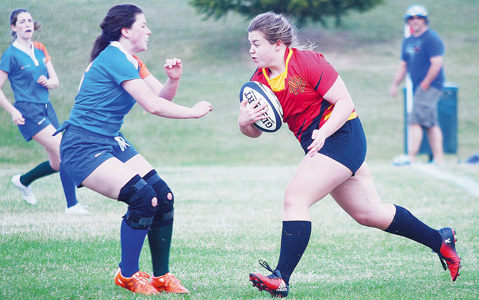 ROLLING THROUGH: Andrea Harvey of the W.R. Myers Rebels varsity girls rugby team dashes up the field with the ball at Ken McDonald Memorial Sports Park against Winston Churchill Griffins on May 2 in a home match. TIMES PHOTO SUBMITTED BY GARRETT SIMMONS

W.R. Myers Rebels varsity girls rugby team managed to squeeze out a win on the road last week versus the Winston Churchill Griffins.

“We came out on top, I think the final was 25-22,” said head coach Chris Komery about the game in Lethbridge on May 7. “The same old story with us though, we came out of the gate really hard. Unlike the last game we played them, we managed to hold the lead right up until the end of the game, but for whatever reason, we’re going to look at some stuff as to why we fell apart in the last 10 minutes. We kind of want to get back in the game inside of 10 minutes left.”

The Rebels dropped an earlier game against the Griffins, but Komery suggested the team’s game play has improved since that 22-15 loss in early May.

“As far as commenting on the actual game, the girls played much, much better the second time around against Winston than we did the first time. Everything we concentrated on in practice between the first game and the last game, they really showed heart, and I’m really proud of how they came out — they came out on all cylinders for sure.”

With the season more than half over, the Rebels hit the field this week for a home game in Taber.

“We’re a little past the mid-point, we’ve got four games under our belt, and we’ve got two games left. We play Raymond at home on Thursday this week, and then LCI comes to town for our regular season closer on May 23,” said Komery.

An emphasis on constant improvement has been a hallmark of Komery’s coaching style, and has paid dividends for the team on the pitch.

“It’s good. Right from the first game, the thing that I am most impressed with the team this year is — and it’s what the coaches have managed to preach every time — is to get better each game in one or more aspects of your individual game, and how you’re going to help the team out better. It’s a bit of generic statement I have before kick-off for the girls — concentrate on what you’ve improved on from the last game, and apply that to making the team successful today on the pitch.”

Komery is now anticipating the post-season, although dates haven’t been confirmed yet.

“We will get a buy to the zone finals because we’re the higher seed. So if the dates work out right, we are going to play the zone final in Lethbridge on June 4. They just came out with the wild card rankings, so the south will get two berths for each tier for the provincials. So it looks like we’re going to be going to provincials as well.”

With a home game on Thursday evening versus the Raymond Comets, Komery is hoping for a banner crowd to come out and support the Rebels.

“We had a really good crowd at our first home game a couple of weeks back at Ken Mac, it would be great to get another crowd. Raymond is always a tough team, they’re very, very good, and they’re very well coached. Even versus LCI on May 21, it would be good to have a home crowd behind us.”

Both upcoming matches — versus Raymond on May 17 and LCI on May 23 — are at Ken McDonald Memorial Sports Park, with varsity at 5 p.m. and junior varsity at 6:15 p.m.