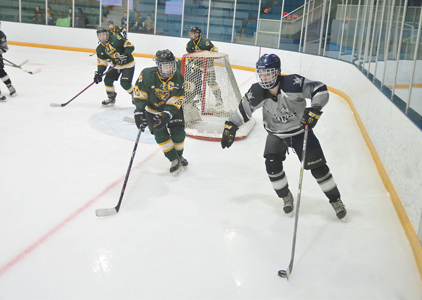 For a team that was in danger of having the plug pulled on it due to lack of numbers at the beginning of the season, they gained strength as the season wore on, culminating in a tight 3-2 semifinal loss to the Oyen Bees on Sunday in midget ‘D’ provincials at the Taber Arena.

Luck was not on the Taber Oil Kings side during the semifinal that saw the hosts utterly dominate at times with nothing to show for it, along with getting stung by the Bees on a controversial call.

“I think reffing was part of it for sure. There was a couple of icings where the one created the one goal that should have been called. It was a chase for a puck that crossed the line well and no one touched it. It was the go-ahead goal,” said Duane Nevil, head coach of the Taber midget Oil Kings. “In a game where you are fairly dominating, I think we were 20 shots above them for the first two periods. We’d be 10 minutes in zone and they would come out and all they had was icing the puck.”

But as they say with puck luck, the Oil Kings were finding it hard to find the finish despite the lopsided puck possession time they were enjoying.

“For sure, the puck Gods were not on our side. We had three open nets where we could have taken that game and just a weird bounce here and there where the kids were taking their swings, it would pop up over their stick and roll over to the corner and we’d have to re-start up our cycle again and go at it,” said Nevil. “I thought the boys played really well this weekend.”

Spencer Phillips and Zach Young scored for the Oil Kings who got assists from Max Nevil, Grady Honess, Ryan Mankow and Dawson Hendricks.

The semifinal loss was the punctuation mark on a midget provincials run by the Oil Kings that showed a high level of compete by the squad for the duration.

The team went 2-1 in round-robin play, losing their lone game in pool play in the dying minutes, a 5-4 defeat at the hands of Valleyview Ice Bears on Thursday at the Taber Arena.

“Our first game right out of the gate, we lost to them in the final four minutes due to a penalty,” said Nevil.

The Oil Kings rebounded the next day to record a 7-5 victory over Toefield Titans on Friday.

The Oil Kings finished off round-robin pool play with a 5-2 victory over Ponoka Stampeders on Saturday at the Taber Arena.

Phillips, Hendricks, Jensen, Halvorson and Honess scored for the Oil Kings who got two assists apiece from Mankow, Young and Jensen.

“They were a tired team, but we completely dominated them. I don’t think they registered a shot in the first period,” said Nevil. “I couldn’t be happier with the weekend we had with the boys. I was looking for more discipline and I thought we were fairly disciplined. We took a couple of dumb penalties all weekend, but overall they were minimal. We played structured and that’s what wins hockey games.”

The Oil Kings played some inspired hockey in front of its home crowd this pat week at the Taber Arena. Considering the team had seven skaters to start the season which had coaches scrambling for players, the bell curve of how the team came together was quite satisfying for Nevil.

“You get a few kids that were in the ‘AA’ system the whole time and there’s this bitterness when they get cut. It took awhile to overcome that the first little while, but after that, they all figured it out that they are all good hockey players,” said Nevil. “Sometimes you need that to grow in a different way. al the kids grew and they figured out the game with three different types of systems with the forecheck that I don’t believe they really knew before well. We also had three sets of power play and the penalty kill. I’m pretty happy with the kids. It ended up being one of the better groups of kids I’ve coached, having fun and being one of the tighter groups.”

Kitscoty Pitbulls ended up winning midget ‘D’ provincials with a 5-3 win over Oyen Bees on Sunday at the Taber Arena.