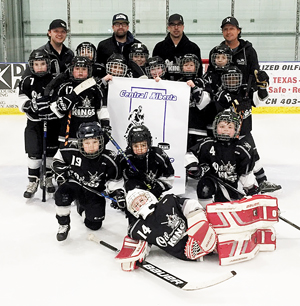 TOO LEGIT TO QUIT: Taber novice Oil Kings proved to be royalty in both league and playoff competition for the 2017/2018 minor hockey season. TIMES PHOTO SUBMITTED

The squad squared off against Duchess Storm in the Central Alberta Hockey League final and won 3-0 in the first game at the Taber Arena earlier this month.

The team then traveled to Duchess and earned an identical 3-0 win. Nixen Miller had a hat trick.

ATOM: Taber atom ‘B’ Oil Kings fell in the second round of its Spud League playoffs with two tight games against Lethbridge Ghostriders.

The team’s first game was a 4-4 draw at the Taber Arena.

Damian Beswick had two goals and Blake Rabusic and Ryler Kiss had singles. Wieler Langhofer had two assists. The two-game point total series ended with an 8-7 victory by the Ghostriders in Lethbridge.

Beswick had four goals and Kiss, Tristen Egeland, and Zachary Fehr had singles.