Celtics stumble at 1A zones 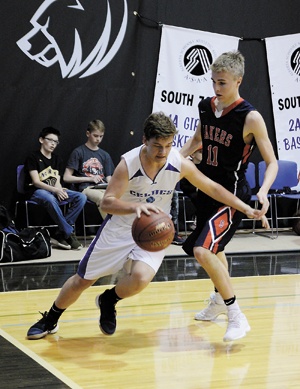 It was a Jekyll and Hyde season for the St. Mary’s Celtics boys basketball team and unfortunately, Dr. Jekyll did not resurface at 1A South zone competition this past week at Lethbridge College.

The Celtics dropped two of its three games, including a 60-43 loss to Foremost in the bronze-medal game, the team the Celtics also lost to in the River Ridge Basketball League championship as well.

The Celtics went into the 1A South Zone tournament as the No. 1 seed and beat Picture Butte 76-65 which saw the Celtics scrambling at one point as the squad sputtered in trying to get its high-octane offence going. Carl Rodrigo had 17 points in the win and Tyrell Martens had 14.

“We struggled in all aspects of the game. Our team defence was weak and that led to poor defensive rebounding, and as a result our fast-break offence was nonexistent in the second half of the season which was a big part of our game in the first half,” said Gabruck. “In the first half of the season, we were able to play a fast-tempo game and tire out and wear out other teams. Our work ethic wasn’t as good as it was in the second half. The rankings were coming out earlier, and being ranked so high, maybe we thought we didn’t have to work as hard. Looking a the second half, we didn’t have as much enthusiasm and work ethic. When things didn’t go right, our kids got a little frustrated and they lost confidence in each other.”

The zone semifinal saw the Celtics drop a 78-59 decision to the eventual gold-medal winning Stirling Lakers.
Rodrigo had 19 points in the contest and Cobe Cobarrubias had 12.

In the 60-43 loss to Foremost in the bronze-medal game, the Celtics were back on their heels from the start, trailing 15-4 after the first quarter.

“We made a run at the end of the third quarter and the start of the fourth and we were able to get it to three points, we had a possession, lost it and then they ran away with it in the fourth quarter,” said Gabruck.

Rodrigo had nine points and Emmanuel Adra had eight.

It was a very top heavy zone in 1A boys competition this year as the Celtics were able to get their favourable ranking based on head-to-heads.