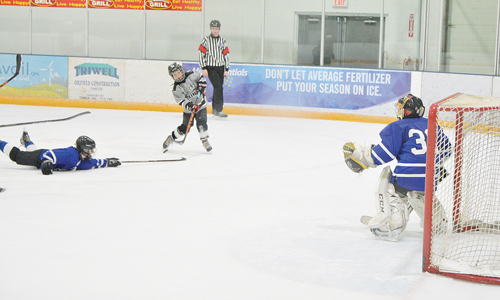 Taber novice Oil Kings ruled its subjects on the way to winning the Central Alberta Hockey League banner this year, with its latest game being a 12-6 doubling of Irvine Bulldogs at the Taber Arena on Sunday.

ATOM: Taber atom ‘B’ Oil Kings skated to a 7-7 draw against the Lethbridge Bandits at the Taber Arena on Saturday.
Damian Beswick had four goals in the tie and Zachary Fehr had two goals. Blake Rabusic rounded out the scoring with a single.

PEEWEE: Taber peewee Oil Kings recorded a tie and a loss in Central Alberta Hockey League play on the weekend.
The tie was a 7-7 draw against Oyen at the Taber Arena on Saturday.

Sunday’s tilt was a 4-2 loss to Irvine Bulldogs on the road.

Evan Rabusic and Kyler Marchuk scored for the Oil Kings.