Muller speed skating for the nation 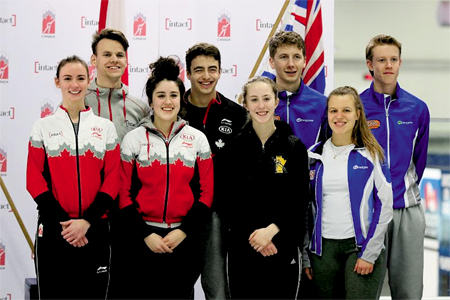 Taberite Kaleb Muller has qualified for the biggest stage of his young speed skating life.

Muller was named to the Junior National Team for long-track speed skating after impressive performances at the selection championships at Fort St. John in British Columbia earlier this month.

“This is the best I’ve been feeling. This past weekend (Feb. 3 weekend) is almost the most important competition of the year for me, because it was a qualifying race. The top four juniors from Canada go to junior worlds and they picked those from this meet,” said Muller. “Longer distances are definitely my stronger races where I struggle with the shorter distances. I just wanted the gap between the other skaters to be less than it usually is for the shorter stuff. That way I knew I could take them in the 5k.”

For long track, Muller admits there is no holding back as he goes all out for the whole race as Muller noted he was able to differentiate himself from 50 other juniors.

The Junior National Team leaves on Feb. 28 where they will train for the World Junior Championship in Salt Lake City that goes March 9-11. For now, Muller will continue to train in Calgary.