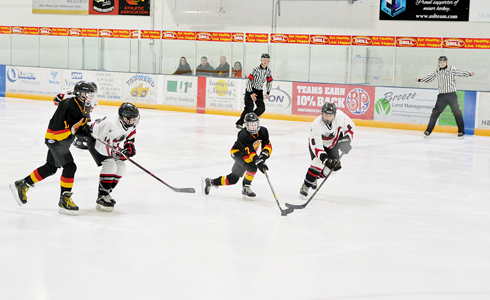 Logan Leroux was solid in net to earn the win, facing 49 shots on goal.

Tanner Turcato and Nakoda Thunderchief scored for the Golden Suns.

Bodnar, Kostiuk and Halverson scored for the Suns, with the game winner coming shorthanded by Halverson.

Barrows earned the win in net, facing 37 shots on goal.

Taber midget “AA” Golden Suns are on the road Feb. 24 and Feb. 25 with games against Wheatland Chiefs and Medicine Hat Hounds respectively.

BANTAM: Taber bantam “AA” Golden Suns (4-24-1) suffered a tight 4-3 loss to Foothills Bisons (20-7-2) in SCAHL play on the road on Saturday, as the Bisons, the top team in the South Division, scored the game winner on the powerplay with 3:31 left in the game.

Dylan Granson tallied twice in the loss and Braeden Sheppard had a single.

Nathan Verloop and Jed Magarrell both had two assists apiece.

Ty Young faced 38 shots on goal for the Golden Suns in the loss.