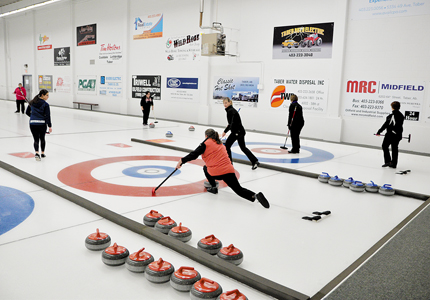 Several teams came out to compete at the Taber Ladies Bonspiel which concluded this past weekend at the Taber Curling Club.

In one of the best ‘A’ event finals in recent years at the Taber Ladies Bonspiel, there was plenty of drama between two Lethbridge teams as skip Nanette Dupont had a come-from-behind victory to earn the championship with teammates Kendra Nakagama, Shirley Kohuch and Avice DeKelver.

Down by two late in the match, Dupont managed to steal two in the seventh end and another in the eighth to win 5-4 over the rink of Karen Morrison, Val Leahy, Shirley McPherson and Olga Fyfe.

Taking third in the ‘A’ event were the foursome of Taber’s Mae Kanomata, Cindy Kanomata, Gina Turcato and Venisa Garner.

Leading the way in the ‘B’ event were the Taber team of Andrea Makarchuk, Heather Paterson, Shannon Clarke and Kristy Coulter.

Vauxhall’s Jo Jones was fourth in the ‘B’ event, along with Suzanne Finlayson, Cindy Kurek and Nevada Huvenaars.