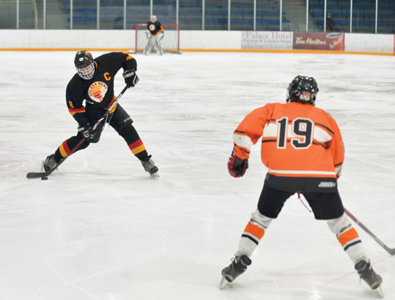 SLAPPER: Braeden Sheppard of the bantam Golden Suns connects on a slap shot during a game last week at the Taber Arena. TIMES PHOTO BY COLE PARKINSON

The first was a 4-3 win against Lethbridge Hurricane Hounds (20-5-4) on the road on Friday night, beating the top team in the South Conference in the process.

Logan Leroux faced 33 shots on goal to earn the win in net.

Hayden Mack and Kole Fujita scored for the Suns.

Ethan Barrows faced 39 shots on net in the loss.

Caden Heins, Peyton Poncelet and Michael Stronge scored for the Suns who got two assists from Nathan Verloop.

Taber bantam “AA” Golden Suns are on the road on Saturday against Foothills Bisons.

PEEWEE: Taber peewee “AA” Golden Suns (3-23-2) were swept up by Hurricanes this weekend, surrendering double-digit goals in both of its games.

The team returned home and lost 11-2 to Lethbridge Hurricanes White (14-9-4) at the Taber Arena on Saturday.

Schlenker faced 47 shots on goal in the loss for the Golden Suns.