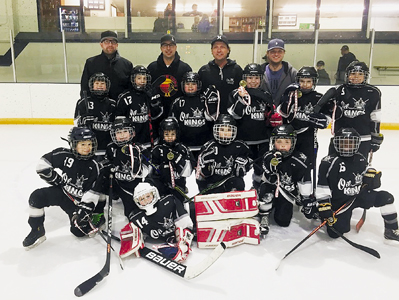 TEAM SUPREME: Taber novice Oil Kings are all smiles after having nary a loss on the scoresheet in its impressive run at a tournament in Bassano, resulting in a championship against the hosts. TIMES PHOTO SUBMITTED

Taber novice Oil Kings ran the table on the way to the gold medal at a tournament in Bassano.

The Oil Kings faced off against the hosts in the gold-medal game and came away with a 10-4 victory.

Nixen Miller had the hat trick and an assist to help seal the win. Cruz Duell had two goals and an assist. Also potting two goals were Dane Degraw and Lincoln Wiebe. Raiden Koizumi rounded out the scoring with a single.

ATOM: Taber atom ‘A’ Oil Kings cruised to a 7-1 win over Chestermere Lakers at the Taber Arena on Saturday.