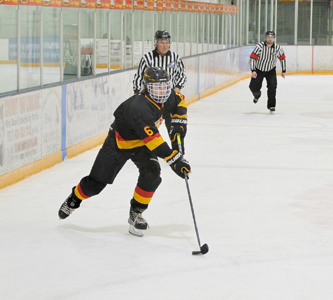 PLAY MAKER: Peyton Poncelet of the Taber bantam “AA” Golden Suns skates in on the opposing net during weekend play versus Red Deer at the Taber Arena. TIMES PHOTO BY TREVOR BUSCH

Golden Suns goalies were under siege for the night as Landon Porteous and Ty Young faced a combined 49 shots on net.

The Golden Suns rebounded at home with a 3-1 victory over Red Deer (7-17-1) at the Taber Arena on Saturday evening.

Cleland, Caden Heins and Braeden Sheppard scored for the Suns.

Porteous faced 26 shots on goal to take the loss in net.

The Golden Suns doubled up Foothills Bisons (2-22-1) 6-3 on Friday night, pelting the Bisons with 52 shots.

The team was then narrowly edged by West Central Tigers (14-7-5) on Saturday night in a 4-3 game.

Kole Fujita was on fire in the game, scoring three unanswered goals for the Golden Suns, including one short-handed.

Logan Leroux was very busy in the game, stopping 47 of 51 shots to take the tough-luck loss.

The Golden Suns recorded the same 4-3 score on Sunday afternoon, but this time reversed the decision against Red Deer Elks (7-14-1) in the victory.

McCulloch tallied twice and Fujita and Nakoda Thunderchief each had singles.

Barrows earned the win in net, facing 36 shots on goal.