Measuring day one for the record books 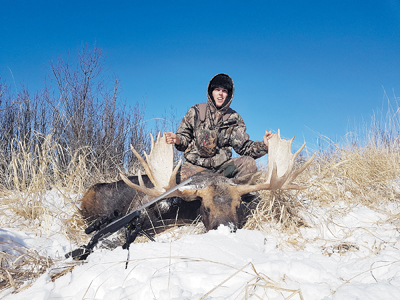 WORTH THE WAIT: Matthew Erick shows off the moose he bagged near Manyberries that took him nine years to have his name drawn for the tag for the elusive animal. A six-hour trek was made in -20 Celsius weather on the hunt that netted the hunter approximately 400 pounds of meat and an excellent score on the antlers at this past weekend’s Taber Fish and Game Association Annual Measuring Day at the Taber Community Centre Auditorium. TIMES PHOTO SUBMITTED BY MATTHEW ERICK

Entries were on the upswing at 2018’s Taber Fish and Game Association Annual Measuring Day with 165 this past weekend at the Taber Community Centre Auditorium.

“Our entries were up this year, partly due to the mule deer theme with a lot of entries and displays coming in,” said Dave Chontosh, president of the Taber Fish and Game Association. “The archery hunters were very successful this year. There are more and more people using the bow and arrow. Photo entries were up which was nice to see.”

Very high quality entries were also the name of the game this year with nine qualifying for the Boone and Crocket (rifle) and Pope and Young (bow and arrow) record books.

“That’s a very high number for the year. Some of them were not current. From past years, there was a guy who brought in three entries that were shot in the 1950s that were never measured before and made the Boone and Crocket record book,” said Chontosh.

Given the rarity for the chance at some animals in southern Alberta, some people’s entries this year were years in the making.

“The draw system is based on available numbers of applicants applying for the draw and you have to put your draws in before the middle of June.”

Other big events coming up are the Taber Fish and Game Association Family Fun Fishing Day on Jan. 27.

The Taber Fish and Game Association Coyote Reduction Incentive Program is continuing into 2018 which you can get more information on by calling Dave at 403-317-0623.

The following are the results of the measuring day:

Taber Archers and Bowhunters Bowhunter of the Year – Laurence Nielsen.

Hunters and fisherman are encouraged to pick up their awards from the measuring day at the Taber Fish and Game Association Annual General Meeting and Awards Night on Feb. 7.