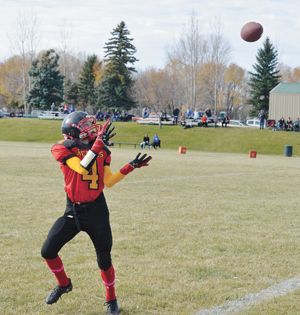 SPIRITUAL: Taber Football Association has been catching some accolades as of late as the organization earned the Spirit of Taber award which will be celebrated at the Taber and District Chamber of Commerce Dinner and Awards Night on Jan. 19. TIMES FILE PHOTO

There is the fighting spirit found in the game of football and that spirit was recognized in Taber Football Association winning the Spirit of Taber award that will be celebrated at the Taber and District Chamber of Commerce Awards Night on Jan. 19.

The association over the years has been a driving force to make the football field, locker rooms, announcer booth, concession and lights a reality out at Ken McDonald Memorial Sports Park for players and fans alike to enjoy. But, apart from the infrastructure for the sport has been the pride that has been encouraged when a player puts on the jersey.

“I think we have really raised our visibility in the community. We volunteer at Cornfest, we participate in the parade. Football had flown under the radar in Taber for a number of years where people just didn’t see what we were doing,” said Jason Jensen, president of the Taber Football Association. “Years ago we had volunteers like Keith Williams and the rest who put all that work in to get the field developed at Ken McDonald Park and I don’t know if a lot of people knew the work that was put into that years ago. And the last few years we have really been pushing hard to be more part of the community.”

Jensen views football as one of the best sports around for teenagers in that it is one of the most inclusive sports.

“I think it is a real benefit for the community to have football going because it’s one of the few sports where there is a spot for every kid. A lot of the complaints people have with teenagers nowadays is activities and football gives something for teenagers to do. I know of some teenagers in the community who haven’t had anything to belong to and they found football,” said Jensen.

And in that sense of belonging, the Taber Football Association has taken measures to try and keep kids safe in the very physical sport. Taber football was one of the first sports organizations in Western Canada to implement the King-Devick Concussion Test when the bantam team adopted it back in 2013, along with teaching safer technique in the sport.

The King-Devick concussion test has three cards that have numbers on them that are spaced in different ways and patterns. You do a baseline time of how long it takes the player to read them off before the season starts. If a player takes a hard hit during the season and you suspect they may be suffering from a concussion, you pull them off the field to the side and in less than a minute, you can administer the test.

If the player is out by more than five seconds from their baseline time they had at the beginning of the season, a concussion has likely occurred.

The test has been around since the 1970s where it was used to detect reading disabilities according to Jensen.

But in terms of using the testing for concussions, it has only been used extensively that way since 2009.

The Mayo Clinic has publicly endorsed the King-Devick Concussion Test as well.

The Taber Football Association was ahead of the curve of even professional football, as the CFL and NFL did not adopt the test until 2015.

“The big boogeyman for football has been concussions and head injuries. I have pointed it out a million times and the stats back it up, there’s head injuries in every sport, we are trying to do something about it and be proactive about it,” said Jensen. “We recognize that head injuries are a major concern, so we fundamentally changed the way we teach tackling. We fundamentally changed the way we teach hitting in general. And with that test, we have found better ways to be able to recognize if a kid has suffered a head injury and we get them out of the game before anything gets any worse. I can tell you, it has worked. I have seen a dramatic drop in concussions in the last two years.”

Another safety push the Taber Football Association has had is its care with its helmets.

“We have taken the initiative to replace our helmets every five years, rather than sending them for recertification. We are outright replacing them,” said Jensen.

Jensen noted what has been pushed from a board level on down is that the organization is not just churning out good football players, but good citizens as well.

The bantam team took it as an initiative this year to entertain residents of Linden View with a flag football game while visiting the seniors. High school football players can often be seen helping out at peewee and bantam games.

Several community organizations who have looked for help in their events have had the Taber Football Association answer the call, including Cornfest which included grounds clean up.

“Seniors very rarely get to see something like that and it made everyone’s day down there. Something as simple as having fun and throwing a football around can be enjoyment in someone else’s day,” said Jensen.

Jensen can’t remember the last time the Taber Football Association has raised fees which has been another push to keep the sport affordable for lower-income families for their kids to enjoy.

“That is the reason why we do so much fundraising. We don’t want to have to raise fees. You listen to a lot of the barriers families are having with sport in general and cost is a huge one,” said Jensen. “If we can keep the sport so that the registration fees are low and all the kid has to do is buy a pair of shoes (rented football equipment comes with registration fee), and heck, even half the time we can outfit a kid with a pair of shoes out of our locker room.”

Jensen added the Taber Football Association is very flattered in winning the Spirit of Taber award and thankful to whoever made the nomination to the chamber.

“It lets us know we are being recognized in the community and at least we are on the right track,” said Jensen. “I really have to commend the board we currently have. There are only six of us, but everyone works so hard to make this a success. We work hard to build this program and have the players give back.”

The Taber and District Chamber of Commerce Annual Dinner and Awards night goes on Jan. 19 at the Heritage Inn.

Honoured will be Spirit of Taber, Small Business of the Year, Customer Service Excellence and Citizen of the Year.