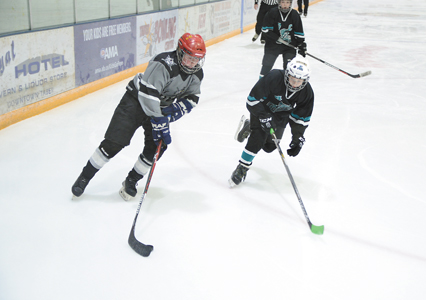 The loss was 3-1 to Bow Island/Foremost in Foremost on Friday evening.

The team returned home and turned things around in a 9-4 victory over Coaldale Cobras at the Taber Arena on Saturday.

The Oil Kings continued its winning ways with a 6-2 victory over Brooks Bulldogs on Sunday at the Taber Arena.

Hendricks had the hat trick and McClelland, Phillips and Mankow had singles. Mankow also had two assists.

The first game was a 7-4 loss to Irvine Bulldogs at the Taber Arena on Saturday.

The second was a 11-9 defeat to Oyen at the Taber Arena on Sunday.

Eldridge had five more goals to go with two assists with Allen getting two tallies. Lauwen and Devan Loewen had singles.
Evan Friesen, Marchuk and Evan Rabusic had assists.

ATOM: Taber atom ‘A’ Oil Kings had a big weekend of minor hockey competition, winning both of its games handily.

The first was an 18-1 pasting of Nanton on the road on Saturday.

The Oil Kings followed up with a 8-4 doubling of Airdrie at the Taber Arena on Sunday.

Chase Stronge had the hat trick to go with two assists. Gray also had a hat trick and Tolsma and Umbach had singles.

The atom ‘B’ Oil Kings were victorious as well in a 13-4 win over Coaldale Cobras at the Taber Arena on Sunday.

Damian Beswick had five goals in the win. Wieler Langhofer and Tristen Egeland both had two goals apiece.

NOVICE: Taber novice Oil Kings skated to a 3-3 draw with Oyen on the road on Sunday in Central Alberta Hockey League play.

Dane Degraw had a goal and an assist with Kellon Schalk and Nixen Miller also scoring. Heston Hansen and Madix Miller had assists.