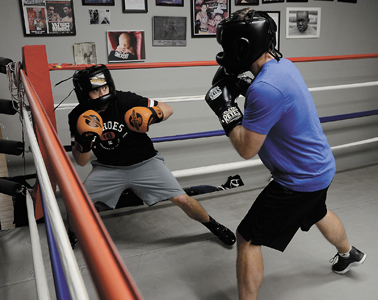 Joel Mills had part of his dream fulfilled when he was finally able to box in front of his hometown in Taber at Unfinished Business back in July.

Now Mills has the business of shifting those dreams of the love of boxing onto a stable of amateur boxers who have been working diligently at Pro Performance Athletic Centre.

“It’s sort of funny how it worked. These guys have been training with me for a long time in the boxing class, just recreationally boxing. After the fight in Taber in July, they decided they’d like to do that themselves, and since they were all training together, it made for the event it has turned into.”

There will be seven Taberites and one fighter from Milk River who will be fighting on the amateur card of Toefista Boxing Series #27 on Dec. 29 at the Deerfoot Inn and Casino. They include Jared Bell, Brent Anderson, Spencer Valgardson, Darren Pelesky, Justin Young, Lee McTaggart, Oskar Timofiejew and Brad Olson.

“They have really cranked up their training from where they were in the recreational classes to where they are now. The last 12 weeks has been huge. Every day I have them doing something,” said Mills. “Most of the time, the guy who is in the best shape will have the advantage. It doesn’t matter how good you are, if you’re not putting the work in and you’re not in shape, it doesn’t matter how good you are. The guys have been putting the work in, there is no question if these guys are going to be ready. Amateur is three rounds with two minutes each. It’s six minutes of fighting and it will be balls to the wall. Win, lose or draw, these guys are ready to put on a show.”

Getting eight amateurs onto the same boxing card from the same gym is usually unheard of. But given how much support Taberites have shown Mills over the years, an exception was made.

“This is crazy. I am just as passionate about this as I was in the fight in Taber. This is part of my dream too. I wanted to come home and fight at home, but also bring the sport here and with these guys doing this, it’s coming to fruition,” said Mills. “I want people to partake in what boxing really is. These guys are all taking a chance and throwing caution to the wind and trying something they have never done before and I couldn’t be more proud of them. The support is going to be just like one of my fights. More than half the people there will be supporters of the Taber fighters.”

Along with getting the fighters ready physically, Mills has been giving them some mental tips as well in the fight game. Mills has excelled in both amateur and pro boxing in which strategies can be worlds apart.

“One of the things I have always stood by in the amateur ranks because of the scoring system and the distance in the fight, it’s quantity over quality with your punches,” said Mills. “These guys need to put their punches together in bunches and they need to be busier than the other guy. That’s what wins fights. Rather than scoring each round, they score each punch. With human error and the speed of the punches coming, if the judge sees you throwing more punches, whether they are landing or not, chances are you are going to get some of those easy points.”

In the pros according to Mills, you want to place yourself in safe situations where you can throw a punch and then get away.

“One punch could change the whole dynamic of a pro fight. Chances are 99 per cent of the time, no one gets knocked out in the amateurs. You can’t change the feel of a fight with one punch,” said Mills. “In the amateurs you want to try and overwhelm your opponent rather than pick him apart and pick your shots.”

Each fighter will be matched up with someone of like experience as amateur fighters are bunched between 0-3 fights, 3-10 fights and after 10 fights you are in an open category.

“The support in Taber has been unbelievable. There’s guys in Calgary who can’t believe this place even exists. Eric (De Guzman, owner/operator of Toefista Boxing) asks what is Taber. He can’t even wrap his mind around how 300 people are driving up to support these amateurs,” said Mills. “The support these fighters are getting from Taber makes this all worth while. Win, lose or draw, this is what the sport is all about. They are growing and getting out of their comfort zones. Whether they win or lose, they are going to walk out of that ring better people taking their shot at something.”