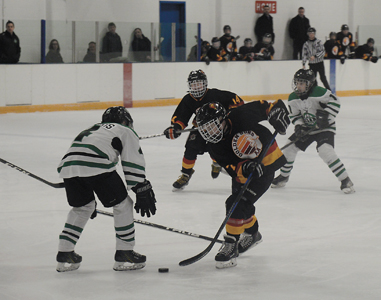 The first was a 5-4 defeat at the hands of Okotoks Oilers Green (9-8-2) at the Vauxhall Recreation Centre on Friday evening.

Ty Fraser tallied twice for the Golden Suns who got singles from Kobe Fujita and Kade Duell.

Kahil Wright faced 47 shots on net to take the loss.

Wyatt Bishop, Bowman Klippenstein and Fraser scored for the Suns.

Marek Schlenker faced 48 shots on net in the loss.

Taber peewee “AA” Golden Suns’ next league game is not until the New Year when they host Chestermere Lakers on Jan. 7 at the Taber Arena at 1 p.m.

Taber bantam “AA” Golden Suns host Okotoks Oilers on Saturday at 5:30 p.m. at the Taber Arena. The team travels to Lethbridge on Sunday to battle the Hurricanes.

MIDGET: Taber midget “AA” Golden Suns (8-5-5) gained a single point in the standings in two road games in SCAHL play on the weekend.

Logan Leroux faced 30 shots on goal in the loss.

Ethan Barrows faced 32 shots on net to preserve the tie for the Golden Suns.

Taber midget “AA” Golden Suns’ next league game is not until the New Year when they host Lethbridge Hurricanes on Jan. 5 at the Vauxhall Recreation Centre at 5:45 p.m. The team then hits the road for two games with a Jan. 6 match against Medicine Hat Hounds and a Jan. 7 game against Foothills Bisons.