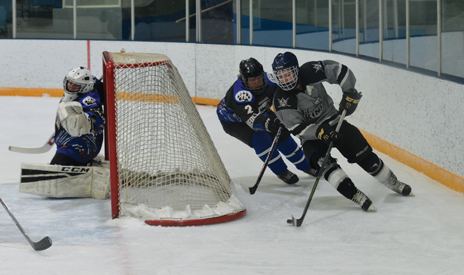 GRIT GRINDER: Grady Honess battles behind the net as he looks for a wrap around during a game last month against the visiting Redcliff Grizzlies at the Taber Ice Arena. TIMES PHOTO BY COLE PARKINSON

Taber midget Oil Kings split its pair of Central Alberta Hockey League games over the weekend against Magrath, starting off with a 6-4 loss in Magrath on Friday.

Josh Verloop had two goals and Jayce Jensen and Zach Young had singles.

Saturday’s tilt saw the Oil Kings bounce back with a 7-5 victory.

Blake Rabusic had a hat trick and Tristen Egeland notched a single.

Nathan Gensorek had two goals and two assists in the loss. Burke Hyland and Mikaelah Clingman had singles.

In other novice hockey play, Tier III Oil Kings skated to a 4-4 draw with Duchess Storm at the Taber Arena on Sunday.