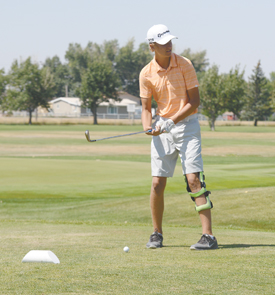 The Taber Golf Club is requesting the Town of Taber refund the cost of the club’s unused annual irrigation allocation.

“The Taber Golf Club has experienced a decline in usership, and a subsequent decline in revenue over the past few years,” said club president Rob Fisher during town council’s Nov. 27 regular meeting. “We cannot afford to continue paying for excess water capacity that we have never used and will never use.”

In 2017, the town and the TID reviewed water agreements, and amendments were made to reflect accurate allocations.

Administration met with Mike Galvin from the Taber Golf Club to discuss the new agreements. Going forward in 2018, the usage amount for the golf course has been lowered to reflect 130 acre/feet. Eighty-five acre/feet of the town’s original water usage allocation has been re-allocated to the Trout Pond, and the remaining 130 acre/feet was re-allocated to the town’s General Water Agreement.

“The Taber Golf Club is not asking for a financial hand-out,” said Fisher. “We’re asking that the town re-assess our billing from 2016-2017.”

The club was asking for the credits to be applied to their accounts, resulting in an outstanding overall credit of $2,790. The club was also requesting that the Town of Taber start paying 11.3 per cent of its irrigation service electric bill starting in 2018 to reflect the portion of power used to irrigate Confederation Park.

Following the delegation’s presentation, Coun. Joe Strojwas suggested discussion of the issue be moved in camera due to contractual concerns, a move that Coun. Garth Bekkering initially questioned.

“Is that contract not a public document at this time? Did council not vote on the contract, and accept the contract in public?”

CAO Cory Armfelt indicated the original contract dated from the mid-1980s and he was unaware if that was the case, but indicated that council could make the document public.

Following discussion, council voted unanimously to defer discussion of the present contract and any potential new contract to council’s Dec. 18 meeting for in camera discussion.