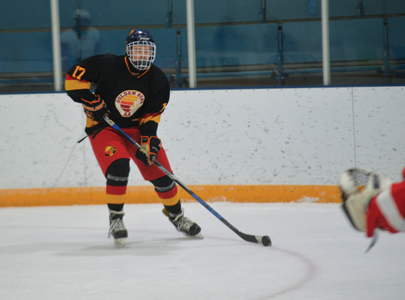 SUN SPOT: Seth McCulloch of the Taber midget “AA” Golden Suns skates in from the slot to attempt a shot on net against the NWCAA Stamps at the Taber Arena on Saturday. TIMES PHOTO BY COLE PARKINSON

The first game was a 3-3 tie with NWCAA Stamps (3-2-1) at the Taber Arena on Saturday evening, as the Suns did all its scoring in the first period.

Logan Leroux faced 37 shots on net for the Golden Suns to earn the single point.

The Golden Suns followed up with a 4-4 draw with CBHA Blackhawks (2-4-3) on the road on Sunday afternoon, tying up the game with 29 seconds left with a power play goal.

Ethan Barrows faced 36 shots on goal to earn the tie in net.

Taber midget “AA” Golden Suns go on the road on Saturday with a game against Central Alberta Selects.

The team then has a ‘home’ game against Medicine Hat Hounds on Sunday at 3:30 p.m. in Vauxhall.

Taber bantam “AA” Golden Suns have the weekend off from SCAHL play before returning with a road game against Red Deer Steel Kings on Dec. 9.