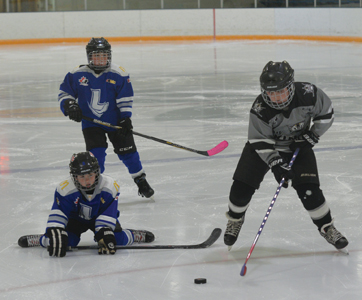 ON THE ICE: The Taber 50KM Atom team had a rough Saturday afternoon as they dropped the decison 15-5 to Lethbridge. TIMES PHOTO BY COLE PARKINSON

Taber peewee Oil Kings got past Raymond with Connor Eldridge’s second goal of the contest with five minutes left in a 5-4 victory in Central Alberta Hockey League play at the Taber Arena on Sunday afternoon, rallying from a 4-3 deficit early in the third period.

The first was edging Redcliff Grizzlies 2-1 at the Taber Arena on Friday night.

Max Nevil and Dawson Hendricks scored for the Oil Kings, getting two assists from Cole McClelland.

The Oil Kings continued its winning ways with a 6-1 victory over Brooks Bulldogs on Saturday at the Taber Arena.

Hendricks and Ryan Mankow both had two goals apiece with Zach Young and Josh Verloop notching singles. McClelland and Trey Halverson both had two helpers apiece.

ATOM: Taber atom Oil Kings split its pair of games on the weekend.

The first was a 15-5 loss to Lethbridge Canes at the Taber Arena on Saturday.

Damian Beswick had two goals and Zachary Fehr, Blake Rabusic and Wyler Krahn each had singles.

The team bounced back with an 11-5 win over Lethbridge Ghost Riders on the road on Sunday.

Beswick had four more goals and Fehr had a hat trick. Rabusic, Tristen Egeland, Tanner Fletcher, and Krahn had singles.

NOVICE: Taber novice 50 KM team Oil Kings were doubled up 6-3 by the Cruse on the road on Friday.

In other novice competition, Taber Oil Kings dominated Irvine 12-0 in CAHL play at the Taber Arena.