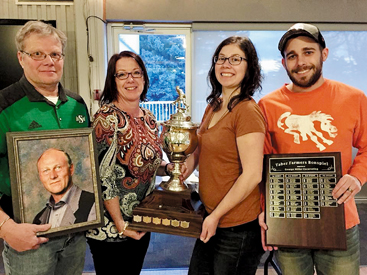 BONSPIEL BEST: The various event winners were all smiles after receiving their trophies including the top team overall in the ‘A’ event during the Taber Farmers/Danny Kerkhoff Memorial Bonspiel competition on Friday night. TIMES PHOTO SUBMITTED BY KEVIN LEAHY

The bonspiel season kicked off with much fanfare this past week as teams competed in the Taber Farmers/Danny Kerkhoff Memorial Bonspiel.