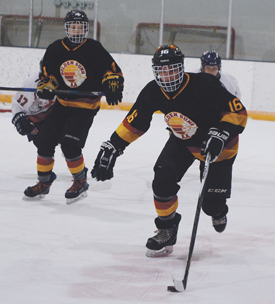 SUN SPOT: Michael Stronge of the bantam “AA” Golden Suns skates out of his own zone against the Hurricanes on Friday. TIMES PHOTO BY GREG PRICE

Taber bantam “AA” Golden Suns (2-12-1) dropped both of its contests on the weekend in South Central Alberta Hockey League play.

The Suns could not hold onto a 3-2 lead heading into the third period, falling 5-3 in the process to the Lethbridge Hurricanes (5-5-3).

The team followed up with a 5-1 loss to Wheatland Warriors (6-8-1) on the road on Sunday night.

Taber bantam “AA” Golden Suns are on the road on Saturday with a game against Foothills Bisons.

PEEWEE: Taber peewee “AA” Golden Suns (3-12-1) earned a single point in the south division standings in its two SCAHL games.
The first was a 5-4 loss to Okotoks Oilers Black (6-6-1) at the Taber Arena on Saturday evening.

Ty Fraser tallied twice in the loss with Rhett Klemen and Ryan Holm each notching goals.

Kahil Wright kept his team in the game, getting pelted with 45 shots on goal for the Suns.

The team bounced back by skating to a 7-7 draw with Airdrie Lightning White (5-4-3) on the road on Sunday morning, rallying back from a 4-1 deficit in the first period.

Fraser notched four goals in the tie with Klemen, Aidyn Law and Holm rounding out the scoring.

Marek Schlenker faced 43 shots on net to earn the tie in goal for the Golden Suns.

MIDGET: Taber midget “AA” Golden Suns (6-4-2) dropped it lone game on the weekend, losing a tight 4-3 decision to NWCAA Bruins (2-1-0) on the road on Sunday afternoon.

The Suns scoring was spread out with Jayden Kostiuk, Kole Fujita and Kaden Booth notching goals.

Ethan Barrows faced 31 shots on goal to take the loss in net for the Golden Suns.

Taber midget “AA” Golden Suns host NWCAA Stamps on Saturday at 5:30 p.m. at the Taber Arena. The team then hits the road on Sunday against CBHA Blackhawks.