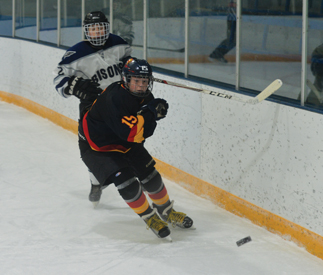 EYE ON THE PRIZE: Caden Heins hunts down a loose puck during the bantam Golden Suns game against the visiting Foothills Bisons at the Taber Arena on Nov. 3. TIMES PHOTO BY COLE PARKINSON

Taber midget “AA” Golden Suns (5-3-2) were victorious in both its games in South Central Alberta Hockey League play on the weekend on the road.

Both victories came against Okotoks Oilers (1-9-0).

The first win had the Golden Suns doubling up the Oilers 6-3 on Saturday night.

Ethan Barrows faced 23 shots on net for the win in goal.

The team followed up with a 3-2 victory on Sunday. Kaden Booth, Cody Stange and Hulit scored for the Suns.

Logan Leroux faced 20 shots on net to earn the victory.

BANTAM: Taber bantam “AA” Golden Suns (2-9-1) split its pair of SCAHL games at the Taber Arena over the weekend.

Landon Porteous faced 42 shots on net in the loss.

The team rebounded to post a 5-2 victory over Red Deer Steel Kings (2-7-1) on Saturday night. Verloop scored twice with teammate Brinley Degenstein also tickling the twine twice. Dylan Granson put the game away with an empty-net goal. Carson Cleland and Carter DeBoer both had two assists.

Ty Young faced 39 shots on goal to earn the victory for the Golden Suns.

The first was a 13-2 loss to Okotoks Oilers Green (6-6-0) on the road on Saturday. Ty Fraser scored both goals. Marek Schlenker and Kahil Wright split goaltending duties in the loss.

The team was much more competitive in its 6-4 loss to Red Deer Parkland (4-6-2) at home on Sunday afternoon. Aidyn Law scored twice and Fraser and Kolter Walburger once each. Fraser also recorded three assists. Wright faced 40 shots on net in the loss.

Taber peewee “AA” Golden Suns have a home twin bill this weekend, starting off with a Saturday game against Airdrie Lightning Red at 2 p.m. at the Taber Arena. The team then hosts Chestermere Lakers at 1 p.m. on Sunday at the Taber Arena.