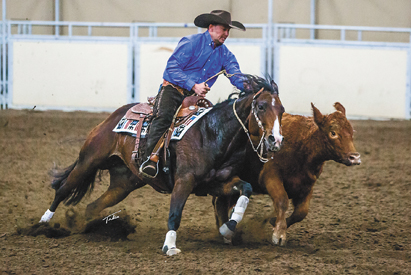 MADE TO RIDE: Stephen Cline and his trusty horse Nikki have taken quite well to the sport of reined cow horse. TIMES PHOTO COURTESY OF NATALIE JACKMAN AT HAVE-DOG-WILL-TRAVEL PHOTOGRAPHY

When he first laid eyes on her, he just knew.

Ever since that fateful day at auction, Stephen Cline and his horse Nikki have formed a special bond.

That bond has frequently been on display in recent years with some impressive finishes in reined cow horse competitions.

With its origins in Mexico and southern California in the 1960s, it is a sport that pays homage to cowboys of old who would ride their trusted steed in helping run cattle effectively. A bond between rider and horse to think like one.

“If you are herding a bunch of cows down a field and one gets away, either you got to stop that cow and turn it back, or you are chasing it for 10 miles to bring it back,” said Cline. “There are a whole lot of maneuvers involved like sliding stops, spins and fast turns on fences to bring those cows back to the herd.”

The reined cow horse events start in May and concluded in October with Cline competing at venues such as Claresholm, Stavely, Ponoka and a big show at the Calgary Stampede. Last year Cline got ninth out of 10 spots, but moved up to fourth this year at the Stampede.

Cline followed that up with another strong showing at the 2017 Canadian Supreme Show with the Taberite being a novice non-pro in Red Deer. You are still allowed to cross enter as novice against the division higher than you, with Cline finishing in fourth in the novice non-pro, while also finishing tied fifth in non-pro. Re-seeding with the top five finishes, Cline would end up in second place in the whole field. Impressive finishes continued on at the Extreme Cowhorse in Ponoka that had cutting, reining, cow horse and steer stopping in the multi event that had Cline and Nikki team up for second-place finishes in both open and non-pro divisions.

Not too shabby for a weekend competitor going up against riders who take up the sport full time, as Cline’s horse at the time of purchase was seen as a longshot to thrive in the sport.

“At the time, our horse was terrified of cows, so I sent her to a trainer in High River for a couple of months just to get used to cows because I didn’t have access to cattle,” said Cline. “After a couple months, the trainer called and said ‘We got something really special here’ and wanted to see how she was going to progress. She took right to it and had a lot of natural talent.”

Cline trained himself as well with lessons and clinics and the bond has been strong every since the first time Cline laid eyes on his horse, Nikki.

“My wife has sort of called her a freak. She shouldn’t have taken as strong to this sport as she has or a non-pro like myself to compete with these other guys, it’s kind of rare,” said Cline. “A lot of these people who do this professionally, they do it for a living and they’ll have anywhere between 10 to 20 horses in their string that they ride every day. That is their job. I’m classified as a weekend warrior. These horses I’m competing against horses and riders ranging from winning between $10,000 to $100,000 quite easily.”

Considered the runt of the litter in what you want in your prototypical reined cow horse, it was more the personality of Nikki that drew Cline to her.

Stephen and his wife Jessica went down to Oklahoma City with a budget in mind to purchase a horse. There were 150 horses approximately in the sale. Wife Jessica watched videos online and went through the booklet and circled 15 she liked where Nikki was not on the list.

“I seen Nikki sitting in the corner in one of the pens. Walking up to the pen, Nikki turned around and walked up to me and put her nose through the gate and started nibbling at me. I scratched her nose and I said to Jess, ‘This one has a nice personality, I like this one’,” said Cline. “She looked in her book and saw it wasn’t circled and she said ‘I didn’t come all the way down here to buy the best personality,’ continued Cline with a chuckle.

Throughout the sale, prices got to be very high, much to high for the horses the couple originally budgeted for. Jessica left to check out Nikki some more, the prices came down and the gavel was struck where Nikki found her new home in southern Alberta.

“She looked like she was going to throw up and she said ‘ I think we just bought ourselves a horse.’ She (Nikki) just didn’t look the part of the rest of the horses. She was longer, she almost looked thoroughbred-y for a yearling quarter horse,” said Cline. “We brought her home and have been so happy with her ever since.”

An enjoyable sport for spectators, there are sliding stops up to 30 feet, there are also large and fast circles to show how broke the horse is in listening to its rider.

“A really broke horse in a bridle, you should be able to have your hand down on her neck and not really driving at all. She should be able to do everything by your body. You look, you sit she slows down. You look she turns,” said Cline of the reining process.

“That shows the judges the amount of control you have on your horse at all those specific points,” said Cline. “You have to take control of your cow. You don’t want it coming at you. You want it to respect your horse, if it doesn’t, it can get dangerous. The cow will attack your horse or jump in front of you and knock you down. It is mimicking being on the range where you have to run a cow down and return it back to the herd. You have three brains you have to control, you have to controls yours, your horse’s and the cow’s.”

Living on an acreage just west of Taber, Stephen and Jessica have no children themselves, but Stephen considers his horse Nikki his daughter.

“She stays with me all the time. I feed her in the morning and I feed her at night. The bond you get with your horse when you see them every day. She puts her head down and gives me a hug every morning when I open up her stall,” said Cline. “She loves me, and I’m told when I’m standing at the shows ready to compete, she leans towards me and gives me a hug. She’s a really cool critter.”

For those who would like to learn more about reined cow horse competitions, Cline encourages people to watch the documentary entitled ‘Down The Fence’ at http://www.downthefencemovie.com.

“It shows a lot of heartache and how hard it is and the struggles to do it right. But, the reward you get afterwards is something I have never felt,” said Cline. “When you have that relationship with your horse that well, it’s a lot of fun.”

Riding horses since he was three year sold, Cline is taking his baby steps still in his path to competitive rein cow horse competitions. Preferring to stay in the novice non-pro category, Cline will look to win enough money for the 2018 season to eventually compete.

“I want to have one more year experience in this class so I can be at the top of the field. If I show up somewhere, I want to be competitive,” said Cline. “I know right now I have the horsepower to do it, it me and the experience I need a little bit more of. The plan is to go to a competition in Las Vegas in March, do the local Claresholm shows to get practice and then November 2018, I will be heading to Fort Worth (Texas) for a national competition if my horse is sound.”

Traveling between 15,000 to 20,000 kilometres a year just for his competitions, Cline acknowledged he would not be able to pursue his passion without the support of his family like his wife Jessica and his cow-workers at Taber Auto Electric as his weekends are filled with his horse training and travel to competitions.

“It really is hard to explain the sport and show how hard it is until you see it for yourself,” said Cline. “I just love it. The connection one can have with their horse is like no other. It’s a feeling that you can’t explain. I got a mud truck that I race as well and this takes it tenfold for the excitement. To be able to work with your animal the whole winter and then go to these competitions.”