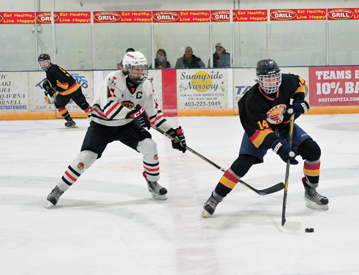 AIR TIME: The passing game helped the Taber bantam Rebels football team get out deep in their own territory, with Nolan Tams making a long completion against the Lethbridge Cougars on Saturday at Ken McDonald Memorial Sports Park. TIMES PHOTO BY GREG PRICE

Thanks to a potent power play, the Taber midget “AA” Golden Suns (3-3-2) were able to mount a furious comeback in its own barn to earn a 6-6 draw with the Wheatland Chiefs (6-3-1), after falling behind 4-0 in the first period in South Central Alberta Hockey League play.

The man advantage was firing on all cylinders with five of the Suns’ six goals with tallies from Kole Fujita, Cole Jensen, Jayden Kostiuk, James Halverson and Seth McCulloch. Nakoda Thunderchief got the comeback rolling with an even-strength goal in the first period. Logan Leroux and Ethan Barrows combined goaltending efforts, facing a combined 29 shots on goal.

Fujita scored the lone Suns goal with an assist from Mason Sande.

Leroux faced 37 shots in the loss in net.

Taber midget “AA” Golden Suns are on the road this weekend with a two-game set against Okotoks Oilers.

The team’s win came on Friday on the road with a 6-4 victory over Chestermere Lakers (1-8).

Kolter Walburger and Ryan Holm each tallied twice for the Suns while Aidyn Law and Ty Fraser got singles while chipping in two assists apiece.

Marek Schlenker got the win in net for the Golden Suns, facing 31 shots on net.

The team continued its road trip on Sunday with an 8-2 loss to Wheatland Braves (7-3).

Fraser and Max Davis scored for the Suns.

Taber peewee “AA” Golden Suns play two games this weekend. The first is a Saturday contest against Okotoks Oilers Green on Saturday. The Golden Suns return home on Sunday for a 1 p.m. game against Red Deer at the Taber Arena.

BANTAM: The Taber bantam “AA” Golden Suns (1-8-1) had a rough weekend with two losses away from home.

On Saturday, Carson Cleland scored the lone goal for the Suns against Airdrie Lightning (7-1), losing 6-1.

Ty Young facing a volley of 47 shots on net.

The Suns put up a good fight on Sunday against the Bow Valley Timberwolves (6-4). Caden Heins and Brinley Degenstein each scored in a 4-2 loss.