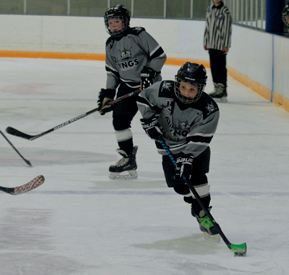 Taber atom “B” Oil Kings earned a 9-5 victory over the Longhorns in minor hockey play at the Taber Arena on Saturday.

In other atom minor hockey play, the Taber atom ‘A’ Oil Kings pushed its record to 6-1-1 thanks to a win and a tie over the weekend.

The Oil Kings skated to a 3-3 draw with Okotoks on Saturday in Stavely in central Alberta Hockey League play.

The team managed a 14-3 win over Kainai Young Braves at the Taber Arena on Sunday.

Kayden Kress and Stronge each had hat tricks with Gray and Planger getting two goals apiece. Tage Jensen, Bell, Sam Tolsma and Lincoln Weiss had singles.

In other novice play, the CAHL Taber Oil Kings fell 12-2 to Coaldale at the Taber Arena on Sunday.

Ethan Volk and Raiden Koizumi each scored for Taber, getting assists from Dane Degraw and Kellon Schalk.