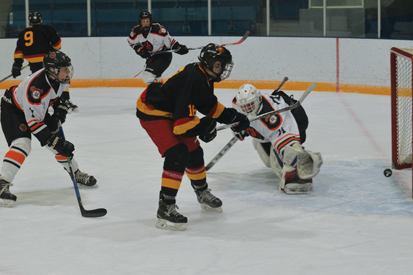 SO CLOSE: Kolten Heins can’t control the rolling puck as he puts it off the side of the net during the midget Golden Suns game against the Medicine Hat Hounds on Oct. 13 at the Taber Ice Arena. TIMES PHOTO BY COLE PARKINSON

The Suns doubled up Medicine Hat Hounds (2-2) 4-2 at the Taber Arena on Friday night.

Ethan Barrows earned the win in net for the Golden Suns, stopping 37 of 39 shots.

The team continued onto Saturday evening where they fell 4-1 to Bow Valley Timberwolves (6-0) at home.

Sande scored the lone Suns tally with assists from McCulloch and Kaden Booth.

Taber midget “AA” Golden Suns travel to Lethbridge on Friday to take on the Hurricanes.

The first was a 10-0 blanking at the hands of Lethbridge Hurricanes Red (6-0-1) on the road on Friday.

Goaltender Kahil Wright faced 39 shots on net in the loss.

Taber peewee “AA” Golden Suns travel to Medicine Hat on Friday to take on the Hounds and then return home on Sunday to battle the West Central Tigers at the Taber Arena at 1 p.m.

BANTAM: Taber bantam “AA” Golden Suns (0-4-1) were on the wrong side of both of its games on the road.

Landon Porteous faced 43 shots on goal in the loss.

Michael Stronge scored for the Suns who got an assist from Carson Cleland.

Ty Young had a busy game, facing 45 shots on goal.