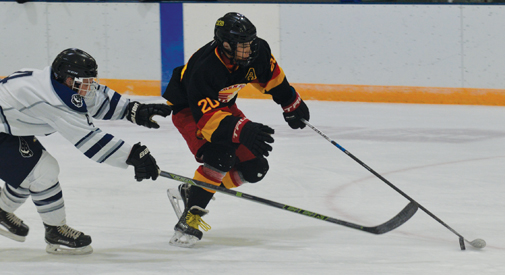 BREAKAWAY: Kole Fujita gets by a Foothills Bisons defense man during the matchup on Sept. 29 at the Taber Arena. The Golden Suns went on to win the game with a final score of 8-2. TIMES PHOTO BY COLE PARKINSON

The first was an 8-2 demolishing of Foothills Bisons on Friday night.

Logan Leroux faced 27 shots to earn the win in net for the Golden Suns.

The team won a much tighter defensive affair on Saturday night with a 1-0 blanking of Okotoks Oilers with plenty of opportunities with the man advantage with 30 penalties called in the contest.

McCulloch got the lone Suns tally with assists from Sande and Kole Fujita.

Ethan Barrows faced 24 shots on net to earn the shutout for the Golden Suns.

PEEWEE: Taber peewee “AA” Golden Suns dropped to 0-2 on the young South Central Alberta Hockey League season after a 10-4 loss at home at the Taber Arena on Saturday afternoon.

Kahil Wright faced 33 shots on goal to take the loss in net.

BANTAM: Taber bantam “AA” Golden Suns dropped both of its SCAHL games on the weekend at home at the Taber Arena.

The first was a 5-1 loss to Central Alberta Selects on Saturday evening.

Brinley Degenstein scored the lone Suns tally with an assist from Jed Magarrell.

Landon Porteous faced 47 shots on net to take the loss in goal for the Golden Suns.

Bantam Golden Suns’ second game was a 6-4 loss to Medicine Hat Hounds on Sunday afternoon as the Suns could not hold onto a 3-0 lead early in the second period with the Hounds scoring five unanswered goals.

Taber bantam “AA” Golden Suns are off this weekend from South Central Alberta Hockey league play. Next league game is Oct. 15 on the road against West Central Tigers.

The team also hosts Wheatland Braves on Sunday at 1 p.m. at the Taber Arena.