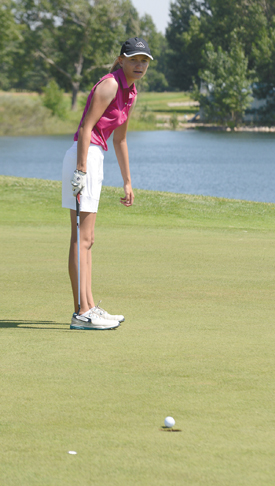 Alanna Makarchuk earned the 2017 junior girls club championship last Thursday with a round of 94.

It was an improvement from last year’s round of 100 she shot at the junior girls club championship, but still not as good as her average score.
A lack of prep time before the club championship threw her swing off kilter.

“I didn’t play as well as I usually do. But, that’s also we were camping for a week, so my swing got a little messed up during that time because I didn’t have a chance to prepare for the tournament,” said Makarchuk, adding she is capable of shooting in the mid-80s.

While the overall round may not have gone to Makarchuk’s liking, she did quite well on certain holes and she was able to recover quite nicely from some bad shots.

“My chipping saved me on a few holes, getting an up and down for a par that I needed,” said Makarchuk.

Alanna admits there is some family rivalry with none other than Andrew Makarchuk, the junior boys club champion who she golfed with for her round last week at the Taber Golf Club.

“Not in this tournament too much, but it’s always nice when I beat Andrew. If I’m doing really good at a tournament, I hope I beat him,” said the 14-year-old Alanna with a chuckle.