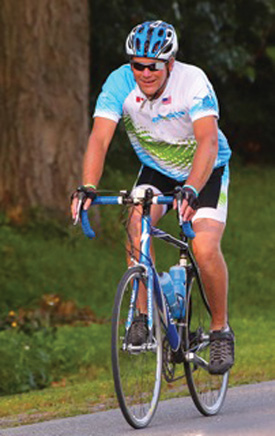 A contingent of Taberites participating in the Sea to Sea Bicycling Mission are putting rubber to road cruising into Taber on July 11.

Sea to Sea is a bicycling mission fighting poverty through fundraising and awareness, and supports Partners Worldwide and World Renew in their efforts to fight poverty around the world.

“The main focus of this is just to bring awareness, and to raise funds, for trying to break the cycle of poverty, whether it’s here in Canada or around the world,” said local rider Peter Kempe. “There’s lots of different areas that the funds are handed to, different organizations and projects that are ongoing.”

In addition to Kempe, other local riders involved include Elly Torsius, Ruth Kielstra, and Brian Kuyper. Kempe has been doing some training in preparation for the coast-to-coast fundraising ride, which left the Vancouver area on June 26.

“It feels good, when you go out on the bike for a couple of hours and you come home, that felt good. I don’t think I’ll be saying that on the trip so much. We’re going to start out in White Rock. The idea is that we dip our rear tire in the Pacific Ocean, you get to the other end, you dip your front tire in the Atlantic.”

Some 70 cyclists are involved in the ride, along with 15 volunteers, and Taber’s hearty hospitality will be sampled by the group during their stay-over on July 11.

“It is a scheduled tour, so we know the dates when we’re at each location,” said Kempe. “It’s a scheduled stop (Taber July 11), we’ll stay overnight at Taber Christian School, and the plan is to have a pork roast, and supporters will be there to meet the cycling group.”

Stops are made for riders roughly three to four times per day, about 25-30 km apart.

“The riders are spead out quite a bit, depending on their abilities, of course. So there’s some that can white-line and be there in no time, and then there’s the rest of us. It is called a bike tour because that’s what it is. It’s not a race by any means.”

Partners Worldwide is a global Christian network that uses business as the way to end poverty, partnering with local businesses and businesspeople around the world to use four methods — mentoring, training, access to capital, and advocacy — with the mission of ending poverty.

“The main sponsors of this tour are World Renew and Partners Worldwide. They’re both working with underpriviledged people. Partners Worldwide obviously is of a more international focus. World Renew — say for instance when there’s a flood in High River, there’s a segment of World Renew called disaster relief, they send in volunteers and do whatever they can to help out. They work with anyone that’s in the area, just to give them more hands to do the work.” said Kempe.

Kempe admits raising what might seem like a daunting figure in order to participate was actually easier than anticipated, thanks to the generosity of Taberites.

“For the full ride, a person has to raise $12,000. It seems like a lot of money, but with the support of friends and the church community, it came together. I was just amazed at people’s giving. By the time I’ve sent in the last bit, it’s $14,000 that I’ve raised, and that’s just myself.”

It is wrong to assume that poverty doesn’t touch every community, even the most affluent, adds Kempe.

“From what I see, for instance even in Taber, the very fact that we have to have a food bank says that there’s issues close to home. It’s not that we’re trying to bring a focus on the food bank, but we want to bring that awareness, that’s the biggest thing. We should never assume that everybody’s doing fine — people struggle. Some of the areas that benefit from this ride, it’s not only a shortage of food, it’s education, medical help, it’s all different areas, and these organizations kind of focus on what the real need is there, and also the involvement of the people themselves.”

The genesis of Sea to Sea can be traced back to a memo written in November 2002. A missionary nurse’s description of a fundraiser that spanned the Appalachian trail inspired Sea to Sea to be formed. After three years of planning, the first Sea to Sea tour celebrated the 100th anniversary of the Christian Reformed Church in Canada and funded organizations focused on ending poverty.

Kempe has made sure he doesn’t have an unforeseen mechanical failures along the way.

“It’s a road bike, and I’ll put a plug in for my pals over at Alpenland. It’s called Specialized, but it is a road bike. I bought it nine years ago, it’s got a pile of miles on it, but it just got tuned up so it’s good to go.”

The grueling leg through the Rocky Mountains is always a challenge for the ridership.

“We’re going to be at Trinity Western University in Langley, travel from there down to White Rock to do our tire dipping,” said Kempe. “From there, two weeks will be used up going to Calgary. We’ll be coming through the Fraser Valley, then up Highway 3 to Princeton area, go up through the Okanagan Valley, then up to Salmon Arm, and from Salmon Arm we’ll take Highway 1 right through to Canmore, and then take Highway 1A right through to Calgary. From Calgary to Granum, that’ll be one day — kind of change of pace because it’ll be 160 km by the time you’re done that day — this segment coming through here, week three, will probably be the longest distances for one week in the whole tour. There’s a couple that you look at and think ‘that’s going to be a good one.’”

The tour dips into the U.S. for part of the way to the Maritimes to avoid heavy shipping routes in Ontario which can be dangerous for riders.

“We’ll go from this area here, right across to Regina. From Regina we’re going to veer up to Yorkton, and then follow Highway 16 down into Portage la Prairie and Winnipeg. From Winnipeg, we’ll go south into the States — the reason for that is just safety. Going along the Lakes through Thunder Bay with that many people, that’s a main truck route. As a truck driver, I’ll tell you what — cyclists can make you nervous,” said Kempe.

Locals can expect to see riders making their way into the community from the west on Highway 3 around 2:30 or 3 p.m. on July 11.

Sea to Sea tours have raised more than $5.5 million to support over 100 organizations focused on ending poverty both locally and globally. Today, Sea to Sea, hosted by World Renew and Partners Worldwide, continues to partner with churches and non-profits focused on freeing people from the cycle of poverty.